Ioannis Aggos today cracked and confessed after feverish examination by the president of the three-judge felony court that he is as charged the Golden Dawn member who spotted Fyssas at a Keratsini café and alerted the attackers. 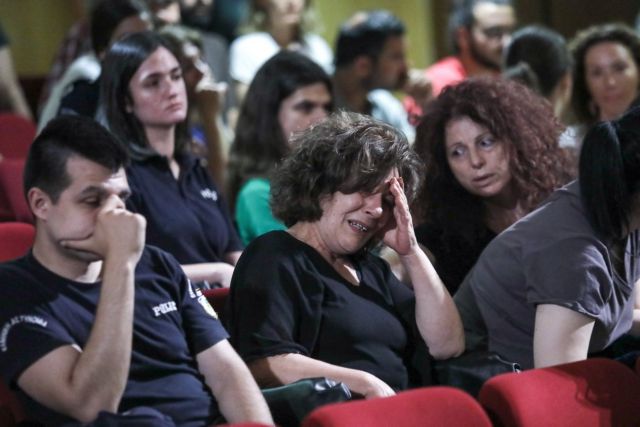 Four years into the trial of Golden Dawn as a criminal organisation and for the murder of anti-fascist rapper Pavlos Fyssas, the court began hearing the testimony of those charged in the case.

The huge delays in the case over the last four years – during which witnesses were examined and documents were read out in court drawn – have drawn severe criticism from the family of Fyssas, legal circles and opposition parties, who have charged that the government and the competent justice ministry failed to provide the adequate infrastructure, including a suitably large courtroom, and a sufficient number of judges and prosecutors to handle a high profile case that has merged a long list of murders and other crimes with which Golden Dawn has been charged.

The first person charged to testify today was a key actor who set off the chain of events that led to the murder of Fyssas by Golden Dawn operational member Yorgos Roupakias on a street in Keratsini near Piraeus.

Ioannis Aggos today cracked and confessed after feverish examination by the president of the three-judge felony court, Maria Lepenioti, that he is as charged the Golden Dawn member who spotted Fyssas at a Keratsini café and called and alerted members of the Nikaia operational branch of the neo-Nazi party that the rapper was there.

It took dozens of questions from the judge before Aggos confessed that he was at the café and called Golden Dawn member Ioannis Kazantzoglou, who has also been charged in the murder, and told him that, “There are certain people who are bothering us and we will leave.”

That was the signal for the neo-Nazi storm troopers to be sent in – including  Roupakias, who stabbed Fyssas in the heart in what was viewed as a professional operation.

At first, Aggos testified that all the calls he placed that night to members of the party’s local branch concerned the athletic match or issues pertaining to the then planned establishment of an association in the Perama shipyard district, where Golden Dawn has in the past staged attacks.

Fyssas, along with his girlfriend and a group of friends on 17 September, 2013, had been sitting at the Korali café watching an athletic match.

When they sensed trouble they left but the Golden Dawn storm troopers arrived almost immediately, which is when Roupakias killed Fyssas, who fingered Roupakias just before he died.

Policemen were in the immediate vicinity once the storm troopers arrived but appear to have done nothing to defuse the situation.

As Fyssas’ tearful mother  Magda looked on (photo), Aggos recounted the events that occurred after he took a seat near Fyssas’ party at the Korali.

He proceeded to contact groups of Goldden Dawn members and cadres.

Golden Dawn MP Ioannis Lagos who has been charged as playing a pivotal role in coordinating the Nikaia paramilitary branch’s storm troopers was recently elected to the European Parliament and Greek authorities have banned him from leaving Greece.