SYRIZA has begun the month-long campaign leading to the 7 July general election by erecting a polarising dichotomy between SYRIZA as the caring left-wing party that is the only bulwark against a grand restoration of neo-liberal austerity that it says is expressed by New Democracy. 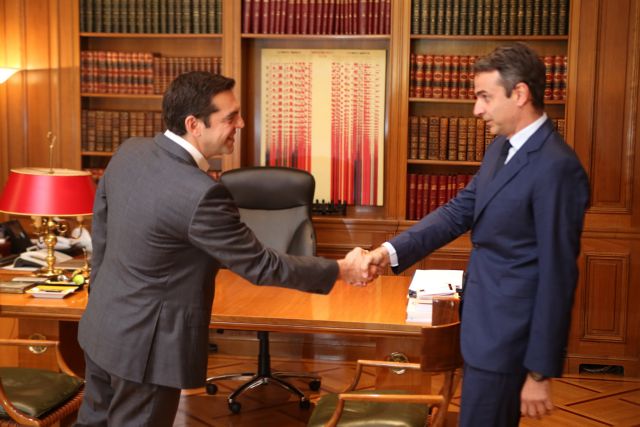 After a decade of bailout memorandum austerity, during which politics was supplanted by economic orders from Brussels, Prime Minister Alexis Tsipras and main opposition conservative party leader Kyriakos Mitsotakis are in the process of rebuilding without naming it as such the classic left-right dichotomy that dominated Greek politics for over three decades after the fall of the junta in 1974.

Having implemented the harsh austerity of the third bailout memorandum that he signed, Tsipras is attempting an express ideological makeover combining a belated focus on bolstering what is left of the middle class (which resoundingly turned its back on SYRIZA) with a classic left-wing distributive justice platform.

That is centred on the fiscal package that he announced on 8 May which combined a slew of social benefits and handouts with tax and insurance contribution cuts which are designed to offer relief and economic stimulus but do not constitute a comprehensive medium-to-long-term economic growth programme.

SYRIZA has begun the month-long campaign leading to the 7 July general election by erecting a polarising dichotomy between SYRIZA as the caring left-wing party that is the only bulwark against a grand restoration of neo-liberal austerity that it says is expressed by New Democracy.

Tsipras has as of 6 June incorporated the EU in his narrative as he interpreted the warnings in a European Commission report issued that day on the Greek economy – which stated that his stimulus package may result in a fiscal derailment – as part of an unholy alliance between the conservative block in Brussels and ND, aiming to rescind social benefits and to reintroduce the harsh austerity implemented and advocated by the IMF.

‘Someone else was governing’

In an attempt to transcend the obvious opposition argument  that SYRIZA was implementing the austerity of the third bailout memorandum, SYRIZA has come up with the dubious stratagem that it was effectively not governing between January, 2015, and August , 2018, as it was merely implementing what creditors dictates with the greatest possibly security net for those impoverished by  the crisis.

The problem is that the argument was flatly contradicted by Finance Minister Euclid Tsakalotos, who in a televised interview declared that the government consciously taxed the middle class as part of a “class-based policy”.

Hence, the patently outlandish argument that SYRIZA has only been governing for the last 10 months and that it is only now implementing its pro-popular programme has done nothing to attract the hundreds of thousands of voters who fled the party and flocked to others – mainly New Democracy – for reasons such as the pension cuts brought about by the insurance system reform and the high insurance contribution paid by freelance professionals.

While New Democracy is running on a classic conservative platform that it will cut taxes and thus stimulate investment and create good new jobs, SYRIZA maintains that ND will do no such thing.

SYRIZA declares that ND will simply roll back popular reforms – such as the re-establishment of collective bargaining contracts abolished by creditors, the hike in the minimum wage, and the abolition of the sub-minimum wage for employees up to age 25 – and proceed with the firing of civil servants, which Mitsotakis categorically declares he will not do.

It now appears quite doubtful that SYRIZA’s last-minute scare tactics will succeed in luring back civil servants, a majority of whom to the surprise of many voted for ND, apparently dismissing SYRIZA’s warning that Mitsotakis will begin firing public sector employees.

After defeating SYRIZA by nearly ten percentage points in the 26 May European Parliament election, Mitsotakis hopes to ride the wave of what George H.W. Bush had famously called “the big mo”, which is to say political momentum.

After months of hammering Tsipras as a liar and deriding him abroad as a populist who is leading the country to disaster, New Democracy is attempting a sea change.

Mitsotakis is running as the man who can re-unite a country deeply divided by the polarising strategy of a ruthless tactician.

New Democracy MPs and cadres have been assigned the role of explaining how Tsipras and SYRIZA divided the country. They speak of the paramount value of partisan self-interest of power-hungry leftists who put their offices and perks above country and the national interest, especially in concluding the Prespa Agreement with North Macedonia.

Capitalising on New Democracy’s landslide victory in the European elections, Mitsotakis for the first time is taking centre-stage and positing himself as New Democracy’s strongest card, superior even to the classic conservative mantra of tax cuts.

His measured remarks on the night of ND’s huge 26 May electoral victory and the message that he aspires to be the leader of all Greeks without class and other distinctions was widely viewed as statesmanlike and will likely be a leitmotif for the rest of the campaign.

Here he is understandably capitalising on Tsipras’ grave strategic error of depicting SYRIZA as the party of “the many” and the country’s historic centre-right party as the organ of a bulimic capitalist elite.

The communications failure reveals the government’s deeper lack of understanding of its electoral base, as it interpreted SYRIZA’s triple 2015 victory – two general elections and a referendum – as a sudden surge of popular support for left-wing governance.

Implosion of the ‘moral advantage’ narrative

Moreover, in constantly shouting that no one can reasonably support the corrupt parties that bankrupted the country- Pasok and New Democracy – SYRIZA is essentially declaring  in a quintessentially undemocratic fashion that it is the only party that has the moral right to govern in perpetuity, even though its self-proclaimed moral advantage suffered severe blows from revelations of government favours for dubious businessmen and embarrassing, unannounced  cruises by the PM and a minister on luxury yachts of shipowners.

The government believed, to some extent rightly, that it would be offered absolution for the austerity measures that it implemented as the public would understand that its hands were tied and that it did everything it could have and should have as a left-wing party – distributing a little something to the lowest tax brackets and strengthening as best it could the social security net.

However, voters naturally placed the blame for the very deep negative impact of key policies on large swathes of the population squarely on SYRIZA.

The prime example is the law drafted by former labour minister (now foreign minister) Yorgos Katrougalos, which established a mean pension cut of 18 percent for those retiring after 2015, hefty  benefits cuts, and a large contributions burden on freelance professionals and the self-employed.

Though SYRIZA argues that there were about 30 different pension cuts in previous bailout era governments, the ruling party’s austerity measures are fresher and highlight the general sense that it was swept to power on a platform of patently false promises – chief among which was the pledge that upon election SYRIZA would abolish the memorandum with a single law.

All these sources of popular discontent with SYRIZA have played into the hands of New Democracy, which however must now fend off SYRIZA’s attacks regarding its positions on labour relations and on its policy on reform of the civil service.

While the idea was that employees would be transferred from services that were overstaffed or inefficient to those which were understaffed, SYRIZA at the time insisted that the “civil service mobility” scheme was essentially the ante-chamber of redundancies.

Mitsotakis: Yes to evaluation, No to layoffs

In the current campaign, Mitsotakis has made clear in the most categorical  manner that there will be absolutely no civil service layoffs with a New Democracy government, and that appears to have sunk in as ND won the largest percentage of any party in the pool of public servants who voted in the Europarliament election.

Nonetheless, New Democracy is decisive about shrinking and making the civil service more effective and productive.

The dual aim will be pursued by hiring only one civil servant for every one employee who retires or withdraws and by instituting sweeping evaluations of public servants.

SYRIZA promises it will hire one civil servant for each one that leaves, thus preserving the current overall number of civil servants.

While tax cuts are the key draw for New Democracy in an environment in which SYRIZA has been roundly blamed for over-taxing and decimating the middle class, in the campaign the ruling party is already calling on ND to explain where the money to cover the tax cuts will come from, as it insists that it will be paid for with deep cuts in the social state – health and education – because it will take time for any new foreign direct investment to take root and for resulting economic growth to cover the budget hole.

Mitsotakis will also be stressing public order and security, which has always been the conservatives’ strong card.

Here, ND is using three symbolic moves to underline its determination to restore as it says law-and-order.

One is the abolition of the institution of university asylum, which by law provides that except for felonies police must be invited by university officials to enter the campus when crimes are committed.

University asylum has allowed anarchist and anti-authority groups to use campuses as an operational base to manufacture fire bombs, attack police and certain buildings with them, and then return to the safe haven of the campus building.

Moreover, university asylum has been exploited by drug dealers who use campuses as a safe base of operations.

Secondly, Mitsotakis is promising to create maximum security prisons where terrorists and those convicted of heinous crimes will serve out their terms with the strictest furlough terms.

He was particularly critical of furloughs granted to the top gun of the November 17 terrorist group, Dimitris Koufodinas, who is serving 11 life sentences for as many murders.

One of his victims was the distinguished journalist and New Democracy MP Pavlos Bakoyannis, who was Mitsotakis’ brother-in-law, the husband of former foreign minister Dora Bakoyannis, and the father of newly elected Athens Mayor Kostas Bakoyannis.

Thirdly, New Democracy has vowed to restore law and order to the historic central Athens neighbourhood of Exarcheia, once an upper-middle-class and bohemian area  which for decades has served a meeting point and hotbed for anarchists, anti-authority groups, and hooligans .