One is not dealing with a small group of enraged youths but rather with a decisive and organised group which without compunction on an almost daily basis degrades institutions and the democratic system in general. 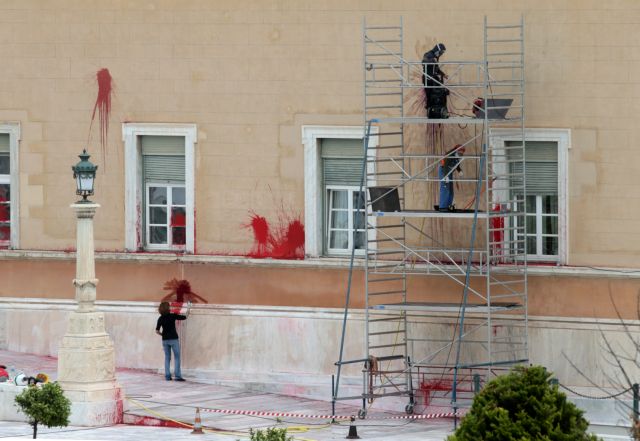 Yesterday’s vandalism by the anarchist group Rouvikonas  of the façade of the Parliament building, which is supposed to be the best guarded building in the centre of the capital, demonstrated the inadequacy of security forces and the impunity of at least some anti-authority groups.

They attack wherever and whomever they want fearlessly as they have understood that they will not be held to account.

The toleration that they have enjoyed has made them both intrepid and dangerous.

They attack, threaten, vandalise both public and private buildings and foreign embassies, and target anyone they like. The only consequence is that some are occasionally hauled in by police and immediately set free.

The fact that all political parties roundly condemned yesterday’s foray will not solve the problem as one is not dealing with a small group of enraged youths but rather with a decisive and organised group which without compunction on an almost daily basis degrades institutions and the democratic system in general.

The government belatedly discovered that one is not dealing with “social fighters” or activists but rather with people whose actions do not fit in the democratic framework.

The government’s toleration until now proves that it has not curbed the group’s activity but instead has made it more dangerous.

Using the denial of a furlough for N17 terrorist Dimitris Koufodinas as a pretext, Rouvikonas and other similar groups have over the last month struck at all and sundry and wreaked havoc.

As tolerant as our democracy may be, it is irrational to allow violence to prevail.

It is the responsibility and duty of the police and the competent ministers to confront such phenomena, which are extreme for a democratic society.

This must be done both with respect for the rule of law and with decisiveness.

Violence, thuggery, and all types of threats from anyone cannot be tolerated in a democracy.