Metropolitanate of Piraeus honours Marinakis in celebration of solidarity 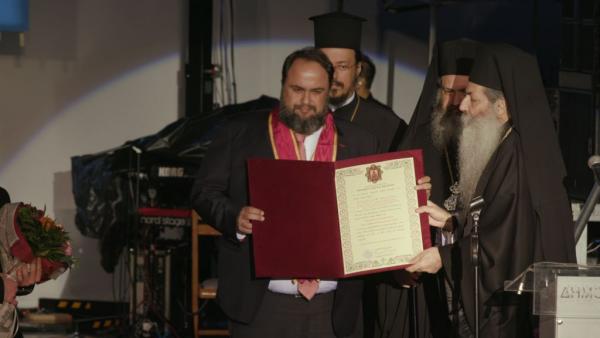 Hundreds of Piraeus residents gathered at the Veakio Theatre for the big “We offer – We Hope – We Sing” concert under the auspices of the Greek Orthodox Metropolitanate of Piraeus.

It was an evening of both culture and a celebration honouring those who have offered selflessly.

The stage was filled from the start with the voices of the young members of the chorus of the Workshop of the Holy Metropolitanate of Piraeus, with Metropolitan Serapheim in attendance.

The concert opened with the symbolic song “Let us all make a start tonight” under the direction of Yannis Grigorakis.

The dulcet sounds of the innocent voices of children on stage set the tone.

Famed singer Michalis Hatzigiannis made a guest appearance at the event.

The most poignant moment was when junior high school student Anna took the microphone to thank Marianna Vardinoyannis for the untiring work that she has offered to thousands of families confronting childhood cancer.

As a token of gratitude for her many years of service the children presented her with an icon of the Virgin Mary.

Vardinoyannis then came to the stage to receive from Metropolitan bishop Serapheim the Gold Cross of the Metropolitanate of Piraeus.

She promised that the icon that she received from the children will be the first to be placed in the chapel that is to be built in the Children’s Cancer Hospital “Elpida” (hope), the crowning achievement of her life’s work.

For his part, Metropolitan Serapheim in his remarks as host of the event underlined the importance of Marianna Vardinoyannis’ offering to the city in which she was born and raised.

In her brief remarks, Vardinoyannis expressed gratitude for the recognition of her work and for the support of shipowner Vangelis Marinakis, who she said “has stood by us and supported us for over ten years”.

Marinakis was the second honorand in yesterday’s celebration of solidarity which was attended by Movement for Change leader Fofi Gennimata and the Mayor of Piraeus, Yannis Moralis.

In a moving gesture, the students of the schools of the Metropolitanate offered Marinakis an icon of Saint Nicholas, the protector of seamen. 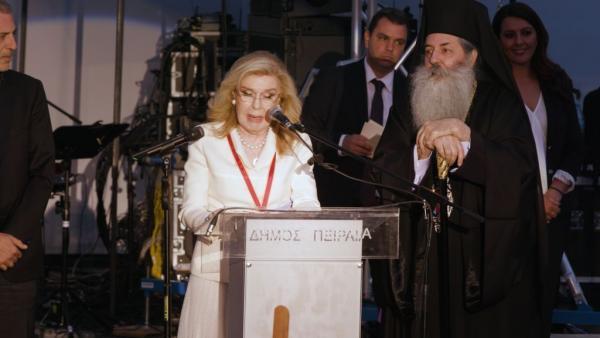 Gold Cross a ‘gesture of gratitude’

Before he came to the stage to receive his gift, the audience saw a video detailing several hitherto unknown charitable works of solidarity of Marinakis.

Marinakis is running for re-election to the Piraeus City Council on the Piraeus Nikitis (Piraeus Victorious) ticket, with which he received the most votes in the last City Council election.

Serapheim said that his offering transcends monetary value as is evidenced by the opportunities children are given to both receive a good education and to develop strong personalities which will in turn make their own contributions to society.