‘By lifting the U.S. Arms Embargo on Cyprus and extending necessary Foreign Military Assistance to Greece, this legislation brings forth a comprehensive approach to the stability of key regional partners,” said Senator Mark Rubio. 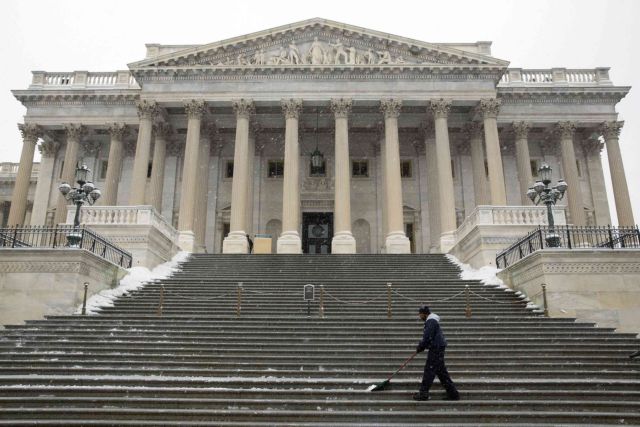 An Architect of the Capitol staff clears snow from the steps of the Senate Chamber at the U.S. Capitol in Washington February 26, 2015. REUTERS/Joshua Roberts (UNITED STATES - Tags: POLITICS ENVIRONMENT)
Share

A bi-partisan bill – Eastern Mediterranean Security and Energy Partnership Act of 2019 – tabled in the US Senate by Bob Menendez (Dem. – New Jersey) and Mark Rubio (Rep. – Florida) provides for the lifting of the arms embargo on Cyprus, military aid to Greece, and support for the trilateral Greece-Cyprus-Israel energy and defence cooperation.

The bill comes in the midst of a severe crisis in US-Turkey relations arising from Ankara’s decision to buy Russian S-400 missile systems and to strengthen its embrace of Moscow. The purchase is sanctionable under US law.

Ankara has often tested the limits of US resolve for quite some time, as when Turkish President Recep Tayyip Erdogan in February threatened that if Washington impeded Turkish operations in Syria it would receive the “Ottoman slap” ( a deadly martial arts technique).

‘US security interests in Eastern Mediterranean’

“The United States has significant national security interests in the Eastern Mediterranean, bolstered by strong and expanding relationships with Greece, Israel, and Cyprus. The cooperation in energy security among these countries in recent years has paved the way for cooperation on a broad, regional security, economic, and energy agenda,” said Menendez, a longtime staunch supporter of Greece.

Provisions in the Act

The Eastern Mediterranean Security and Energy Partnership Act of 2019 would:

“This bipartisan legislation will continue to enhance our mutual energy and security cooperation with our allies in the Eastern Mediterranean region. By lifting the U.S. Arms Embargo on Cyprus and extending necessary Foreign Military Assistance to Greece, this legislation brings forth a comprehensive approach to the stability of key regional partners,” Rubio said.

The Hellenic American Leadership Council (HALC) along with the American Jewish Committee (AJC) have been lobbying for the bill for six years.

“Today’s Mediterranean is reclaiming much of its historic importance. Developments in the greater Eastern Mediterranean region will affect U.S. interests in Europe, the Middle East, and beyond. We applaud the leadership of Senators Menendez and Rubio. This Act will make a difference.” said Endy Zemenides, Executive Director of HALC

For the past six years, AJC and HALC have been lobbying for the legislation.

David Harris, the CEO of the American Jewish Committee (AJC), underlined the importance of the development.

“At a time when the Eastern Mediterranean is emerging as a distinct and vital geopolitical region, efforts of Congress to secure U.S. leadership and bolster existing partnerships should be applauded,” he said.

“For the past six years, AJC and HALC have advocated for a more comprehensive U.S. strategy in the Eastern Mediterranean. The two groups collaborated on the creation of the Congressional Hellenic Israel Alliance caucus and on multiple policy initiatives in the region. Both AJC and HALC enthusiastically support the Eastern Mediterranean Security and Partnership Act and will work to achieve its adoption by Congress,” the AJC said in a statement.