New Democracy decides against no confidence motion over FYROM deal

“We shall do everything in our power to improve the agreement since the ragtag [governing] majority has decided to bring it to a vote and we cannot overturn it,” one ND source said. 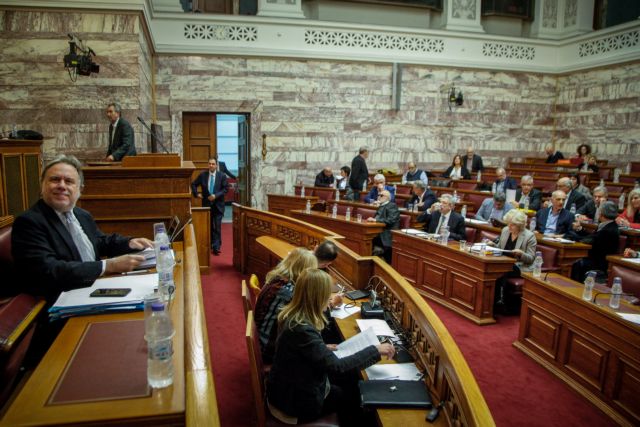 Top New Democracy cadres have decided against tabling a no confidence motion against the government over its handling of the Prespa Agreement amidst charges of political transactions to recruit independent or renegade MPs to ratify the accord.

ND sources have told in.gr that the proposal was discussed by the party on Friday, 18 January and there even thought of tabling the motion within the day.

Instead, the main opposition party opted for battling against the accord in the Parliamentary Committee on Foreign Affairs and Defence yesterday and today and in the debate in the plenary session of Parliament on 23-24 January, where New Democracy is expected to unleash withering criticism of the government.

“We shall do everything in our power to improve the agreement since the ragtag [governing] majority has decided to bring it to a vote and we cannot overturn it,” one ND source said.

That will be the message of Kyriakos Mitsotakis during a visit to Thessaloniki.

Top-level party cadres said that the pros and cons of tabling a no confidence motion one week after the government won a confidence vote were carefully weighed.

The proponents of the no-confidence motion argued that it would expose those MPs who supposedly oppose the agreement but back the government.

Essentially they wanted to highlight what they view as a dirty political game staged by PM Alexis Tsipras and his erstwhile coalition partner Panos Kammenos, who is now playing the role of a harsh opposition div and is behaving like an unguided missile.

Another aim of the no confidence motion was to expose the political games being played in the centre-left by MPs of To Potami party and Democratic Left leader Thanasis Theocharopoulos, who was expelled from the Movement for Change due to his intention to ratify the accord.

Though ND cadres knew from the start they would lose a no confidence motion (as they lack the requisite absolute majority of 151 votes), the point would have been that a vote to ratify the Prespes Agreement is a vote of confidence in the government.

In parliament, not only New Democracy but all the other opposition parties as well are up in arms over the agreement and the allegedly nefarious backroom deals to forge an absolute parliamentary majority for ratification.

While Tsipras in Parliament declared there will be plenty of time to debate and analyse the agreement, in the end he chose a fast-track procedure with just two days of discussion in the committee and another two in the plenary session, triggering a severe opposition backlash.

From the very beginning of the discussion, the Foreign Affairs and Defence Committee was transformed into a war zone over both procedures and substance. Movement for Change MP Andreas Loverdos said that, “The only thing that has not happened is fist fight in a parliament that is reminiscent of African countries”, an odd statement for an ostensibly progressive MP.

Opposition parties are charging that the text tabled by the government in committee is not the full text, implying that there may be hidden irredentist references in the agreement.

Kammenos gets his gun

Meanwhile, Independent Greeks leader Panos Kammenos has launched guerrilla warfare against the government. He is threatening with supposed revelations and speaks of a “government of apostates”. This is despite the fact that he was a cabinet member until last week and played a pivotal role in allowing the government to conclude and table the Prespa Accord.

The contradiction in Kammenos’ stance, now that he is fighting for his political survival, lies in the fact that although he could have blocked Tsipras and ex-foreign minister Nikos Kotzias from concluding the deal by withdrawing his party’s support for the government, he decided to stay on as defence minister until the last minute and has now donned the mantle of a fighter for Macedonia.

The most serious charge has been lodged by opposition MPs who are demanding the full text of the Prespa Agreement in Greek translation.

They maintain that the text of FYROM’s Constitution that was tabled by Alternate Foreign Minister Yorgos Katrougalos was a printout from the text posted by FYROM on the internet and that it does not incorporate the amendments that have been passed in Skopje.

“It is inconceivable not to table the full text of the Constitution of Skopje [FYROM]. We cannot discuss the agreement without that,” said New Democracy’s shadow foreign minister Yorgos Koumoutsakos, a former career diplomat and foreign ministry spokesman.

Loverdos declared that if the full, revised text is unavailable the government must state that clearly so that MPs can evaluate the ramifications.

Opposition MPs are also raising questions about Kammenos’ allegations, first articulated in a 16 October cabinet meeting, that the government received a large amount of money to buy off politicians in Skopje to conclude and ratify the Prespa Accord.

Kammenos at the time pointed the finger at Kotzias, who resigned when the PM did not defend him.

Now, Koumoutsakos is again demanding that Kotzias’ resignation letter be given to Parliament.

“We underline that we should have at our disposal the resignation letter of the former foreign minister sent to the prime minister. Having reviewed the statements of Kammenos and Kotzias, we believe that the text contains references to political events and assessments that can help us interpret the results of the negotiations,” he said.