Tsipras, Mitsotakis to debate Prespa Accord, text to be distributed nationwide

In order to allay any fears by opposition parties and MPs that the government intends to ram the agreement through Parliament with a fast-track procedure, the government is preparing a brief information campaign and a televised debate. 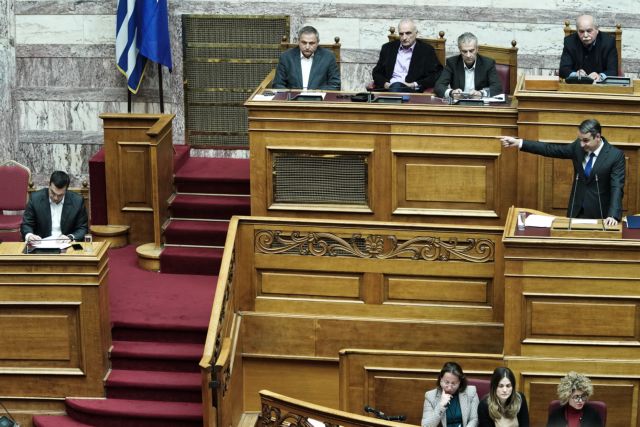 “Parliament yesterday gave its vote of confidence in the stability not only of the government but of the country as well,” the Prime Minister’s office underlined in a statement, issued after the crucial vote that confirmed the government’s one-seat majority.

Now Prime Minister Alexis Tsipras is preparing for yet another, more difficult battle to ratify the Greece-FYROM Prespa Agreement, even as MPs who have said they will vote in favour are receiving a barrage of messages and death threats from those who believe that the government is “selling out” Macedonia.

In order to allay any fears by opposition parties and MPs that the government intends to ram the agreement through Parliament with a fast-track procedure, the government is preparing a brief information campaign and a televised debate with New  Democracy leader Kyriakos Mitsotakis, who vehemently opposes the agreement due to the fact  that it recognises a :”Macedonian nationality” and “Macedonian language”.

“We shall not opt for a fast-track parliamentary procedure for ratification. In any event, we do not intend to hide in promoting an agreement that is crucial for Greece’s future and for regional stability. On the contrary, our intention is to inform every single Greek citizen on all aspects of the agreement so that they can judge lucidly whether the agreement serves our national interests or not,” the statement read.

Read all about it, debate with Mitsotakis

In that context, the Greek Foreign Ministry will arrange for the text of the agreement to be distributed nationwide along with the Sunday newspapers on 20 January.

Moreover, Tsipras has agreed to participate in a televised debate with Mitsotakis exclusively on the agreement, as he said in parliament.

The PM’s proposal is that the debate be televised live on all broadcast channels and that it be held at the beginning of the week of 21 January.

This, the PM’s office stated, will allow citizens not become entrapped in petty partisan games and hysterical expressions of putative patriotism.