Clashes between riot police, protesting teachers outside of parliament

Amidst skirmishes between some of the approximately 2,000 protestors and the large riot police force, one woman was injured by a flare and another suffered back burns. 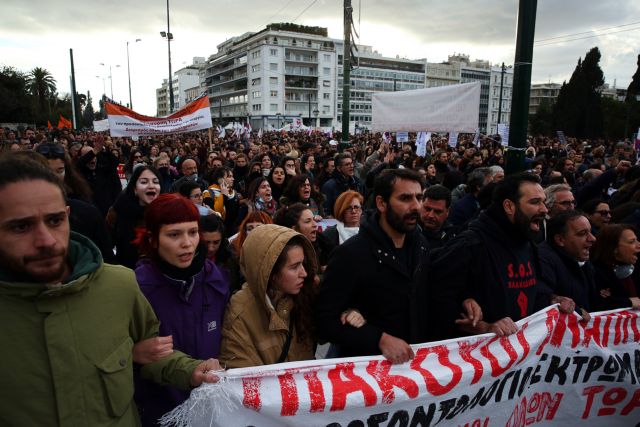 Tensions ran high today at a large protest of Greek teachers’ unions who oppose draft legislation, of which protestors are demanding the withdrawal, regarding new hiring system outside of parliament.

The parliamentary debate on the bill was postponed until 17 January.

Schools in Athens remained closed so that the teachers could protest.

The bill establishes two main criteria for hiring, prior service and academic credentials. Under the new system teachers with very long service can potentially be replaced by a new hiree with a PhD, for example.

Amidst skirmishes between some of the approximately 2,000 protestors and the large riot police force, one woman was injured by a flare and another suffered back burns.

Before that, participants in the demonstration attempted to break the riot police blockade on Vasilisis Sofias Avenue in order to reach the Parliament building, where the related bill was to have been discussed. Police kept them at bay with the use of tear gas.

The primary school and secondary school teachers’ union both participated in the protest.

Workers in municipalities who lack job security demonstrated with the teachers.

Along with the teachers, school students and university students chanted the slogan “Make the education minister [Kostas Gavroglu] an hourly worker and send him to work at [the small, remote island] Fourni, Ikaria.