Α newspaper grows in Shisto: Reporting by and for migrants

Hossaini recalls that at first the Afghan women were confronted by the reactions of the male refugees, who had reservations about a group of young Afghan women asking questions. 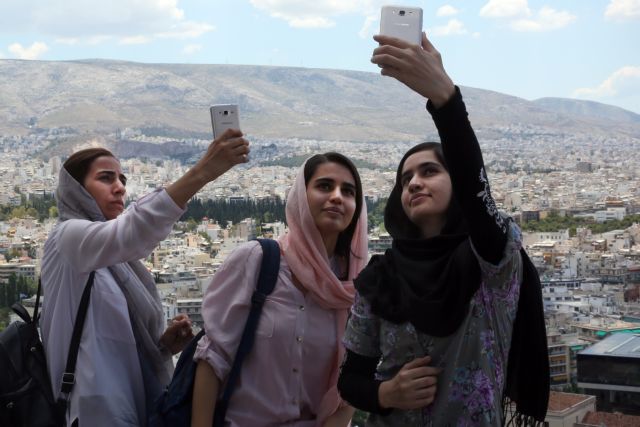 Since early youth, Mahdie Hossaini remembers being told she was worthless.

A daughter in a large family in Afghanistan, she spent the first years of her life in Iran.

She says she always felt “in [her] soul as being at war constantly” and that she is a “second-class person”.

In schools, she fell prey to bullying and then as a refugee to discrimination.

“A woman from Afghanistan has a lot to say, but she has not learned how to say all that,” Hossaini wrote in an article in the refugee newspaper “Migratory Birds”, which is published in various languages and which is written by refugees in the Shisto reception centre.

Mahdie, who is 28 years old, is the Editor-in-Chief.

A voice for women

The inspiration for this alternative newspaper came when in 2016 reporters from all over the world began visiting the centre while covering the refugee crisis.

“Nobody wanted to speak with them,” recalls Hossaini, who ended up in Shisto after fleeing Iran as a refugee.

At the time, nobody believed that such reporting and interviews could change something

“That is pretty much how we [women] ourselves decided to become the reporters and to give ourselves a voice,” she explains.

Gradually, 14 more Afghan women, mostly minors, joined the team of reporters. They were enthused by the idea and wanted to somehow express themselves and share their stories. From the start their aim was to establish their own newspaper.

As Hossaini recalls, at first they were confronted by the [negative] reactions of the male migrants and refugees, who had reservations about a group of young Afghan women asking questions.

Still, they were undaunted, and with the aid of a Greek network for children’s rights they managed to persuade the UNHCR and the EU to provide financial assistance for their innovative endeavour.

Until now, 13,000 copies have been distributed at various structures that care for refugees and migrants.

Moreover, the editorial team posts articles on social media in five languages – including Arabic and Urdu, the official language of Afghanistan.

“We write about our concerns, about how people behave toward us, and about how someone can help us,” said 18-year-old Mo Alfirai from Syria, who recently joined the editorial team.

Although the entire project was exclusively for women at first, some young men have been added to the group.

“Everyone participates on an equal footing, and that is very important,” said 18-year-old Denisa Bayraktari, who is studying journalism while working on the paper.

“Many of the reporters felt muzzled in their homelands. Now they have a vehicle through which they can speak freely,” she said.

Young Greeks are also involved in the layout and production of the newspapers. They too can express themselves on the refugee issue.

Still, most writers remain refugees who come and go, like migratory birds and always in the direction of peace and a better future.