Government says it has parliamentary majority even without Independent Greeks

Today, state minister and government spokesman Dimitris Tzanakopoulos declared in an interview with Real FM radio that the government has the parliamentary votes necessary to complete its four year term, 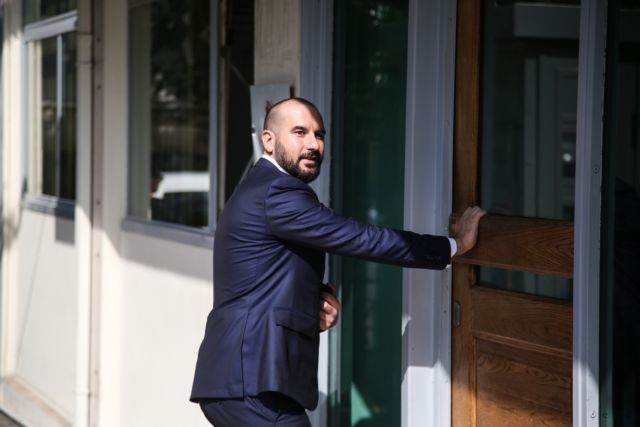 For months, pundits and the media have wondered whether the government can survive the pull-out of junior coalition partner Panos Kammenos and his Independent Greeks party, if and when the Greece-FYROM Prespa Agreement is tabled in the Greek Parliament for ratification.

Kammenos himself answered the question at a stormy 16 October cabinet meeting, where he vowed not to topple the government if New Democracy tables a no-confidence motion in parliament. In an unprecedented move, PM Alexis Tsipras had asked all his ministers to assure him that they will not topple the government over the Prespa Agreement.

Today, state minister and government spokesman Dimitris Tzanakopoulos declared in an interview with Real FM radio that the government has the parliamentary votes necessary to complete its four year term, in October, 2019.
“This is a discussion that the prime minister and his coalition partner – with whom I have an honest and earnest relationship, cooperation, and frequent contact – will conduct in early March,” Tzanakopoulos said, noting Kammenos’ pledge not to side with ND leader Kyriakos Mitsotakis in the event of a no confidence motion, so as not to destabilise the country.

As regards the press reports on the resignation of former foreign minister Nikos Kotzias, Tzanakopoulos said that they were inaccurate. He said Tsipras and Kotzias retain close ties and agree absolutely on the Prespa Agreememt, the implementation of which is moving along, and that maintaining government cohesion is crucial.

Referring to Alternate Health Minister Pavlos Polakis proclamation at a party meeting that SYRIZA should push the judiciary to expedite court cases and put some people in jail [for corruption], Tzanakopoulos claimed that the statement was purposely distorted.

“What Mr. Polakis insists on, as do the government and the prime minister, is that one must ply ahead with a clean-up and the institutional protection of the state from corruption,” he said.

“Mr. Polakis has waged a huge battle in the health sector to create better terms of auditing and transparency in a sector that was ravaged by extra-institutional networks. I think that this is what was stressed in his speech – that the government must do whatever it can so that those who have broken the law will be placed on trial by the judiciary. You know very well that the government does not put people in jail. The Greek judiciary puts people in jail, yet there are also administrative actions and audits, and investigations in which the government takes the lead,” Tzanakopoulos underlined.