The main opposition VMRO-DPMNE party, from which Zaev hopes to draw votes, is fiercely against the agreement, and was the motive force behind the boycott of the referendum on the Prespa Agreement. 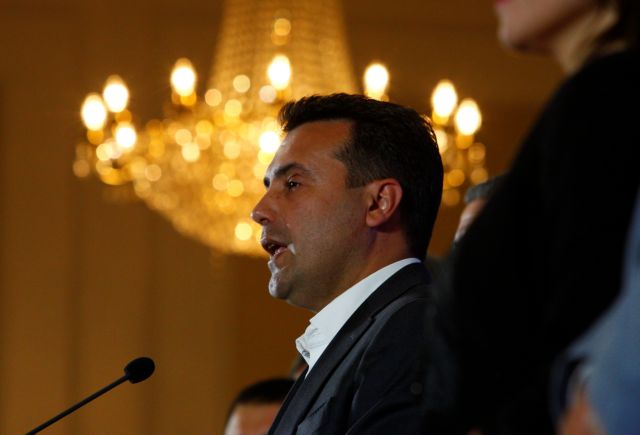 Macedonia's PM Zoran Zaev gives a speach during a referendum night on changing Macedonia's name that would open the way for it to join NATO and the European Union in Skopje, Macedonia September 30, 2018. REUTERS/Ognen Teofilovski
Share

FYROM’s Prime Minister Zoran  Zaev is in the midst of feverish consultations in his bid to garner, with the help of opposition MPs, the two-thirds parliamentary majority to amend the country’s constitution, as required by the Greece-FYROM Prespa Agreement.

The changes involve enshrining the country’s new name – Republic of North Macedonia – in the constitution, from which irredentist references must also be removed.

On 8 October, Zaev’s cabinet approved the text of the government’s recommendations on the amendment process and sent it to parliament.

The main opposition VMRO-DPMNE party, from which Zaev hopes to draw votes, is fiercely against the agreement, and was the motive force behind the boycott of the referendum on the Prespa Agreement. Naturally, it opposes the constitutional amendments that it requires.

Feelers put out by Zaev have been categorically rejected by VMRO-DPMNE leader Hristijan Mickovski, though it is said that he does not control all of the party’s MPs. Mickovski claimed that  Zaev is blackmailing his party’s MPs.

Until now, the 80 MPs needed to garner the two-thirds majority to amend the constitution in parliament have not been found.

Nato Secretary General Jens Stoltenberg has repeatedly stressed that the name change is the sine qua non for FYROM’s admission to the Alliance, and recently underlined that there is no Plan B.

Stoltenberg acknowledged that the issue must be decided by the government and parliament, noting that Nato is ready to induct FYROM as the 30th member of the Alliance, once the Prespa Agreement comes into effect.

The last step is ratification by the Greek Parliament.

The European Commission’s enlargement commissioner, Johannes Hahn, called on FYROM’s parliament to make the necessary constitutional changes, so as to avoid early elections, which could derail the entire process.

He called on the main opposition party to abandon its catastrophic stance and place the interests of the country and its citizens above partisan interests.