Zaev views referendum result as a ‘Yes’, will table Prespa Agreement in parliament

The fact that two-thirds of the electorate did not vote in the referendum was a significant blow for Zaev, as it requires participation of over 50 percent of registered voted to be considered valid. 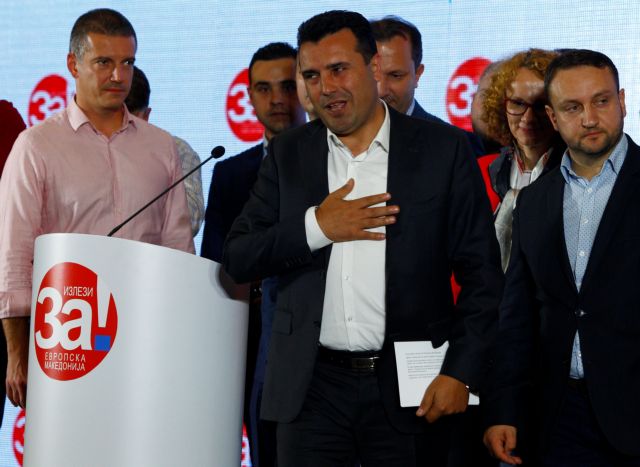 Macedonia's PM Zoran Zaev gives a speach during a referendum night on changing Macedonia's name that would open the way for it to join NATO and the European Union in Skopje, Macedonia September 30, 2018. REUTERS/Ognen Teofilovski
Share

Fyrom’s Prime Minister, Zoran Zaev, vowed to continue to pursue implementation of the Greece-FYROM Prespa Agreement, following yesterday’s referendum on the accord.

He said that he will seek a vote in parliament on the constitutional amendments required by the agreement, in order to resolve the dispute with Greece over the name issue, despite the fact that voter participation in the non-binding referendum did not reach the over 50 percent of the electorate needed for it to be considered valid.

The result, with nearly all the votes counted, showed that 91.39 percent of those who participated voted ‘Yes’ on the agreement, and only 5.71 percent voted ‘No’.

The fact that two-thirds of the electorate did not vote in the referendum, however, was a significant blow for Zaev. Though the results of the percentage of the electorate that voted had not been officially announced, it was estimated that it was 36.6 percent.

Oliver Derkovski, the president of the FYROM’s State Election Commission, said that it is “clear that a decision was not taken” in the referendum.

Implementation of the accord requires that the country’s name be changed to Republic of North Macedonia.

Opponents of the agreement, including President Gjorge Ivanov, called on voters to abstain from the voting in the referendum, so that it would not be considered valid.

“It is clear that the agreement with Greece was not given a Green light by citizens,” main opposition VMRO-DPMNE leader Hristijan Mickovski told journalists, adding that the government has lost its legitimisation after the results of the referendum.

Asked if he intends to step down as PM, Zaev said, “I do not intend to resign…It is my duty to stay on.”
Zaev said that citizens who voted in the referendum made “a serious contribution” and “helped to build the foundations of the future of our country”.

Although the referendum was not legally binding, FYROM’s MPs had said that they would be bound by the results.
However, the fact that the turnout rate was not sufficient (over 50 percent of registered voters) for the referendum to be considered valid, gave opponents of the agreement opportunity to oppose it when it is tabled in parliament.

The nationalist VMRO-DPMNE party has 48 seats in parliament (out of a total of 120 MPs), enough to block the necessary constitutional amendments, for which a two-thirds majority is needed.

Zaev in his post-referendum remarks made no mention of voter turnout, but insisted that the vote of those who supported the name change must be respected. He said that he will put the issue of proceeding with the constitutional amendment process to a vote in parliament, and if it is not approved he will call early elections.
Zaev said that he is determined to ensure that FYROM “accedes to the European Union and Nato”, and that the time has come to support the country’s European prospects.

Opponents of the agreement say that it constitutes a national humiliation.

Zaev and the ethnic Albanian parties (which represent 20-25 percent of the population of the country) have no choice but to attempt to persuade the ten additional VMRO-DMNE MPs needed to form a two-thirds parliamentary majority to support the required constitutional amendments, which will change the name of the country and remove irredentist provisions.

In a telephone conversation after the referendum, Tsipras extolled Zaev’s “decisiveness in pursuing implementation” of the Prespa Agreement.

Nato’s Secretary General, Jens Stoltenberg, urged all political leaders and parties to avail themselves of an historic opportunity.

European Commissioner Johannes Hahn, who is competent for enlargement issues, called on FYROM’s political parties to “respect” the result.