Progress, good will but rough road ahead in FYROM talks

«We have recorded in detail what agree and disagree on. We have identified the main issues for both sides, and I hope that at our next meeting we will be ready to take a big step,” Nikos Kotzias said. 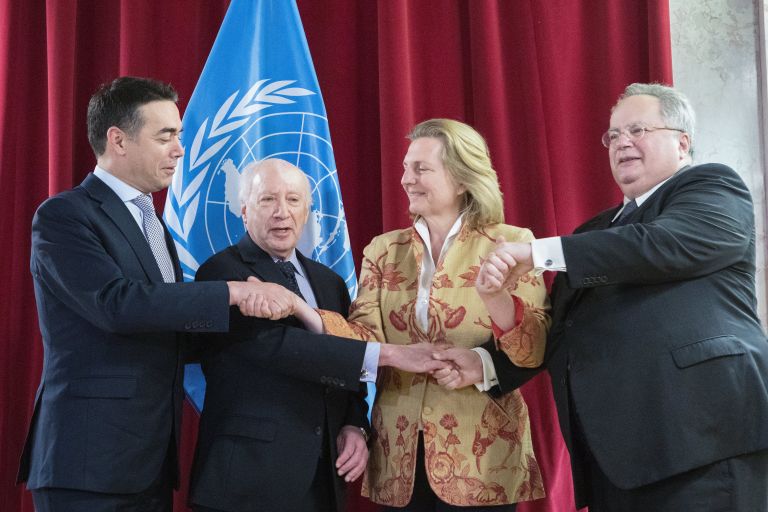 The UN mediator on the FYROM naming issue, Matthew Nimetz, expressed optimism on the course of negotiations while acknowledging that difficult issues remain, after today’s marathon seven-hour talks between Foreign Minister Nikos Kotzias and his FYROM counterpart, Nikola Dimitrov, in Vienna.

Nimetz described the “constructive” talks as cause to be optimistic about the future, as regards the name issue, but he noted that there are a number of open and thorny technical issues that were discussed by experts in the diplomatic delegations of the two sides.

Still, he noted that there was progress on other issues and he expressed confidence that the parties will continue to work in the same constructive framework.

“Both ministers focused on long-term relations, on stability in the region, and on the importance of good relations between the two countries,” Nimetz said.

Kotzias hopes for ‘big step’ at next meeting

Speaking to ERT Greek state television, Kotzias said he was optimistic about reaching a settlement, and that the focus now is on reaching compromises on a series of thorny issues. He said that timetables have been set, but did not elaborate.

Kotzias said that the parties are prepared to take a “big step” at their next meeting.

“We have recorded in detail what agree and disagree on. We have identified the main issues for both sides, and I hope that at our next meeting we will be ready to take a big step,” he said.

The talks were based on the comprehensive settlement proposals recently exchanged between the two sides.
Moreover, there was discussion about the future of Athens-Skopje relations after a possible settlement, including cross-border cooperation and economic and commercial ties.

The possibility of another meeting between Prime Minister Alexis Tsipras and FYROM PM Zoran Zaev was also left open, but that would presumably follow major progress towards a comprehensive settlement.

“Conditional progress has been made in the name negotiations, because as we are moving forward, we are coming across more difficult issues,” Dimitrov was quoted as saying by the Macedonian Information Agency.
Briefing the opposition

Kotzias will brief New Democracy shadow foreign minister Yorgos Koumoutsakos and the leaders of all other opposition parties on 2-3 April.

Main opposition leader Kyriakos Mitsotakis refused to meet with Kotzias, reportedly because he thought it appropriate to be briefed by the PM, so Kotzias will be meeting last with Koumoutsakos last, as he is not a party leader.