While the EU-Turkey summit in Varna-Bulgaria was intended a step toward bridge the differences between Europe and a candidate country that has slid into authoritarianism, reports in the international press saw few results 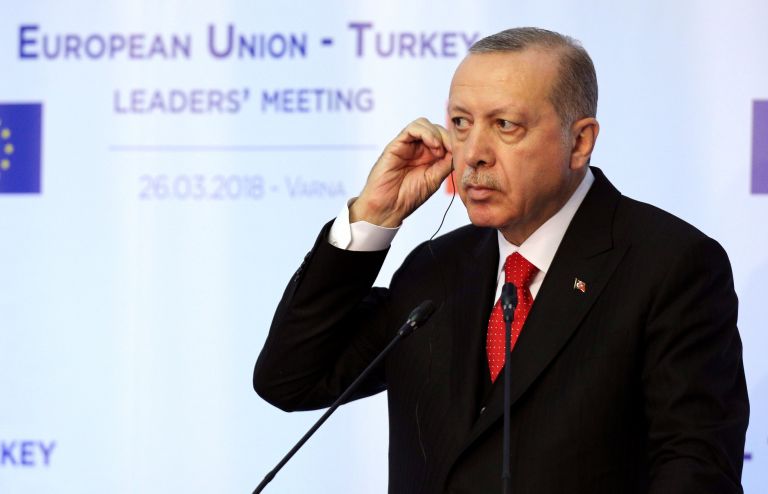 While the EU-Turkey summit in Varna-Bulgaria was intended a step toward bridge the differences between Europe and a candidate country that has slid into authoritarianism, reports in the international press suggest that the high-level meeting managed just to paper over differences, at best.

Germany’s Frankfurter Allgemeine Zeitung (FAZ) concluded that the two sides failed to reach agreement on a number of important issues.

It reported that European Council President Donald Tusk said after the talks that the EU continues to be concerned on the [violations of] the rule of law in Turkey.

He again denounced Ankara’s move to blockade areas of Cyprus’ Exclusive Economic Zone, where European and American companies have signed agreements for gas and oil exploration, and expressed European concerns about Turkey’s invasion of Syria.

For his part, the Turkish leader underlined that EU membership remains a strategic objective for Ankara, and noted plaintively that Turkey has pursued membership since 1963.

Erdogan demanded that the Europeans press forward more rapidly with the upgrade of the EU-Turkey customs union, sweeping aside the key political dimensions of the issue.

He also noted that in February Ankara tabled proposals designed for Turkey to meet EU conditions for liberalisation of its visa policy, and demanded swift action on the part of Brussels.

FAZ quoted Erdogan as saying, “Turkey is a democratic country with the rule of law, which respects human rights and fundamental freedoms and rights,” and he disputed charges of blockading Cyprus’ EEZ, on the grounds that the interests of the Turkish Cypriots must be taken into account.

The Politico website was more pessimistic about the prospects of EU-Turkey rapprochement, as the title of its report made abundantly clear: “Europe fakes Turkish delight: Prospect of breathing new life into Turkey’s bid for EU membership remains as remote as ever”.
The scathing introduction said it all: “Bulgaria’s Black Sea coast offers everything Europe’s political elite expect from a good summit: an exotic location, breathtaking views and (most important) casks of fine wine. If only Recep Tayyip Erdoğan hadn’t shown up.

“Truth be told, about the only thing Ankara and Europe agree on these days is that they don’t agree on much. From Erdoğan’s dismantling of Turkey’s democratic institutions in the wake of the 2016 attempt to overthrow him to Turkey’s recent assault on Kurdish forces in Syria, EU leaders worry that Ankara has become more of a long-term problem than a partner,” the report concluded.

More generous, with a touch of guarded optimism, Bloomberg reported that nothing substantial came of the meeting, but that lines of communications were kept open on crucial issued such as the migrant crisis, the war in Syria, Cyprus’ EEZ, as well as the imprisonment of Greek army officers.

Reuters noted that Erdogan has made a number of enemies in Europe with his aggressive rhetoric and total disregard to the reactions to Ankara’s behaviour.

Finally, Die Welt reported that the two sides failed to reach agreement o a series of issues, but the two to top EU officials offered assurances that Brussels will provide the promised aid for dealing with the Syrian refugee crisis.