Just days after the EU offered a stinging rebuke to Turkish President Recep Tayyip Erdogan over unlawful acts in the Mediterranean and the Aegean, the Turkish leader is expected to table his own demands at today’s EU-Turkey summit in Varna, Bulgaria. 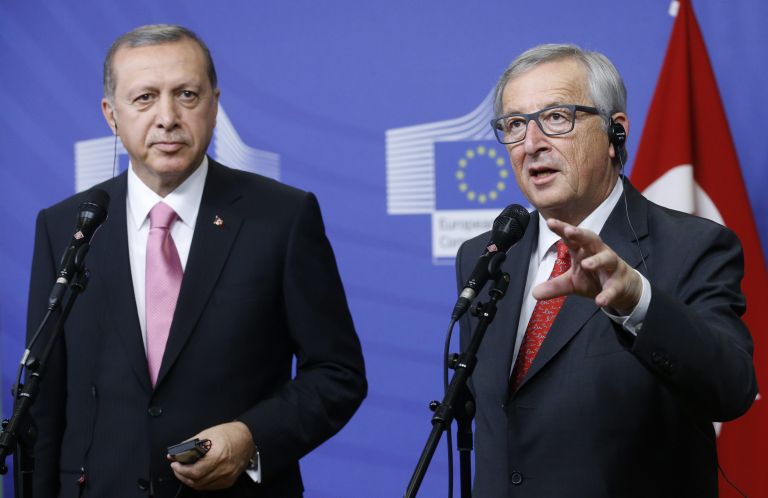 Just days after the EU offered a stinging rebuke to Turkish President Recep Tayyip Erdogan over unlawful acts in the Mediterranean and the Aegean, the Turkish leader is expected to table his own demands at today’s EU-Turkey summit in Varna, Bulgaria.

He is expected to articulate his claims in Cyprus’ Exclusive Economic Zone as legitimate demands on behalf of the Turkish Cypriots, and to set out EU commitments to Ankara that he claims have not been met.

Erdogan will use Turkey’s crucial role in stemming refugee and migrant flows as leverage in setting out a series of demands.

These include jump-starting EU accession talks with the “unfreezing” of six negotiations chapters that Cyprus has blocked and which European Commission President Jean-Claude Juncker had promised to push forward.

Thirdly, Erdogan will ask the top EU officials to expedite disbursal of the second, three-billion euro aid package for Turkey to manage the masses of Syrian refugees on its territory.

The European side will be highlighting the huge challenges to the rule of law following the abortive, July, 2016, coup attempt against Erdogan, and implementation of the EU-Turkey agreement on migrants, while the stalled EU accession talks, and Turkey’s operations in Syria, will also be high on the agenda.

Both sides are determined to keep their dialogue going, as the EU remains a crucial trading partner for Ankara, and Turkey is a necessary partner in confronting terrorism and stemming the migrant flow.

Juncker has recognised the growing differences with Ankara, but at the same time stresses that the EU wants to enhance its cooperation with Turkey, especially as regards implementation of the 2016 EU-Turkey migrant deal, for which Erdogan is demanding a quicker disbursal of funds.

Erdogan is also demanding liberalisation of the visa arrangements for Turkish citizens entering the EU.

For its part, the EU will underscore its concern over the sweeping purges that Erdogan carried out after the unsuccessful coup against him, with 55,000 people (including opposition divs and journalists) being jailed, and 160,00 people being suspended from their jobs or fired outright.

The protracted extensions of the state of emergency have led to violations of the rights of “hundreds of thousands of people”, the EU underlined in a report issued last week.