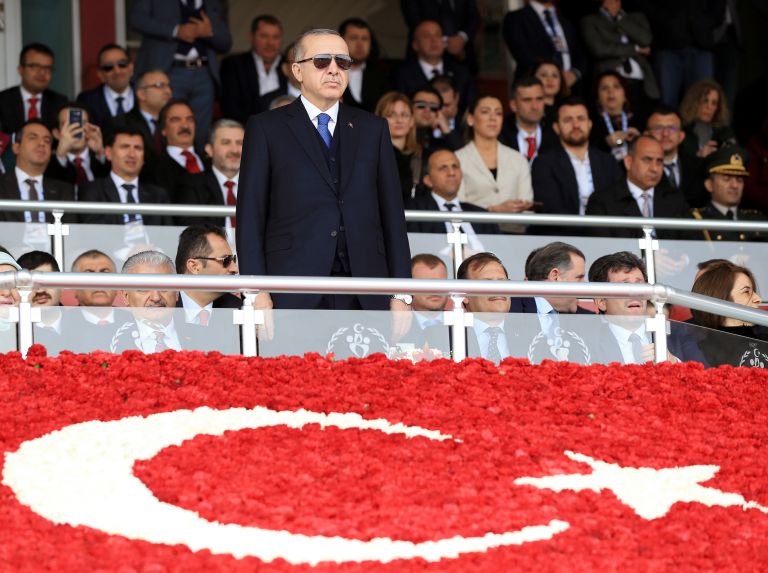 Turkish President Recep Tayyip Erdogan’s heightened nationalist rhetoric towards Greece, his expansionist policies and the crisis in US-Turkey relations have stirred deep concerns in Athens for a number of reasons, including Washington’s possibly decreased leverage in impeding a potential hostile act Ankara against Greece or Cyprus.

At the same time, Athens is sticking to its support for EU-Turkey ties, albeit on a more limited basis, and is not about to attempt to block the upcoming EU-Turkey meeting in Varna, Bulgaria.

Erdogan is charging that the EU has adopted a double standard in dealing with Greece and Turkey, with a bias against Ankara. “The EU supported Greece during its economic crisis, offering 400 billion euros. When countries with oil and gas deposits face problems, they help them, naturally with quid pro quos. When Turkey has problems, they turn their back on us,” he declared last Wednesday.

A day later, Erdogan blasted the US for establishing 20 bases in Syria. “That already signals WW III. We must be prepared for all eventualities,” he said.

His sharp nationalist shift, along with a change in the electoral law, have led to his alliance with the ultra-nationalist grey wolves of the Nationalist Action Party (MHP), with the essential absorption of the extremist party in his AK party, in a bid to secure over 50 percent of the vote in the first round of the next elections.

Meanwhile, Athens is hoping for a positive signal from Ankara on the return of two Greek army officers, who were captured at the Evros border and remain jailed in Turkey, before the March 22-23 EU summit.

Otherwise the Greek side will move to heighten diplomatic pressure wherever it can. The only positive sign is that Turkish authorities reportedly have not discovered on the officers’ cell phones any evidence of military espionage, but that does not guarantee a swift trial and resolution of a particularly thorny issue.

The scheduled 26 March EU summit in Varna, at which Erdogan will meet with European Council President Donald Tusk, European Commission President Jean-Paul Juncker, and Bulgarian PM Bojko Borisov, whose country holds the rotating EU presidency, will almost certainly go forward, and indeed the agenda has largely been set by Turkey.

The Commissioners of Migration and Humanitarian aid, Dimitris Avramopoulos and Christos Stylianidis respectively, had already approved the disbursal of the 2018-2019 three billion euro aid package for Turkey to manage migrant flows, which was announced recently. Ankara is also demanding an upgrade of the EU-Turkey customs union.

Athens and Nicosia are expected to demand that their EU partners, in the Brussels summit’s conclusions, include a paragraph warning against Turkish provocations against them, but that may be difficult at a time when the paramount concern of the EU is stemming migrant flows from Turkey.

The migrant issue was the focus of Erdogan’s telephone discussions with Angela Merkel last Thursday, and Berlin is not expected to table demands on Athens’ behalf at this juncture, not least because of economic interests

According to Deutsche Welle, Berlin has delivered large weapons orders to Ankara for its Syria operations, and Turkey is eyeing an upgrade of its Leopard tanks, with a system to neutralise bazookas projectiles.