In one letter, which is dated 13 January 2014, and regards an MOU on pharmaceutical expenditures, Novartis states that it is among the companies that comprise a think tank focusing on Greece’s transition from the bailout programme to stability and growth. 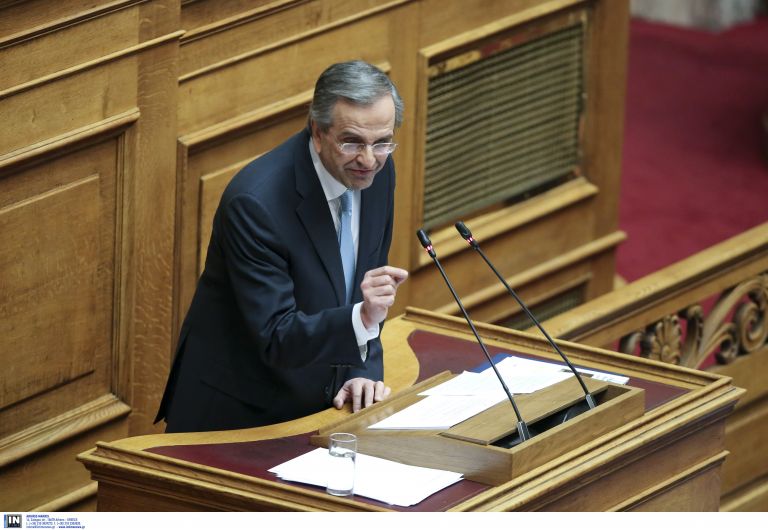 Corruption Prosecutor Eleni Touloupakis, who is heading the probe of the Novartis affair in Greece, has sent to parliament supplementary evidence, including letters from the pharmaceutical company to ex-premier Antonis Samaras, as well as a document bearing Samaras’ official insignia and noting the telephone number of a New Democracy cadre.

According to the state-run Athens News Agency, two letters from Novartis to Samaras pertain to issues of pharmaceutical expenditures.

In one letter, which is dated 13 January 2014, and regards an MOU on pharmaceutical expenditures, Novartis states that it is among the companies that comprise a think tank focusing on Greece’s transition from the bailout programme to stability and growth.

Parliament was in addition sent a manuscript note, with the official insignia of Prime Minister Antonis Samaras, which notes the telephone number of a New Democracy cadre.

The note was produced by a protected witness who has been assigned the code name Ekaterini Kelesi, who stated that it was brought to the company by company vice-president Konstantinos Frouzis, the day after his meeting with then prime minister Samaras.

Also sent to parliament was a CD containing 165 files from Novartis company computers.

New Democracy has asserted that the two letters are not of particular significance. New Democracy MPs sitting on parliament’s investigative committee maintain that the letters were sent on the eve of the Davos World Economic Forum, with aim of arranging a meeting between corporate executives and the PM, but Samaras in the end attended neither the 2014 nor the 2014 Forums.

“The ridiculous moves of the well-known gang continue,” said a Samaras associate, who noted that before the committee even saw the documents, there was a leak published in a “known publication” that has been attacking Samaras.
Venizelos to testify tonight.

Former Pasok leader Evangelos Venizelos, whose name appears in passing in the court records, will appear before the committee this evening. Venizelos, who has registered a number of objections that challenge the legitimacy of the probe and its procedures, will answer questions and present two documents regarding the case.

Meanwhile, the Democratic Alliance (Pasok, Potami, and Democratic Left) has sent a letter to the committee demanding that Frouzis and the protected witnesses be called to testify.