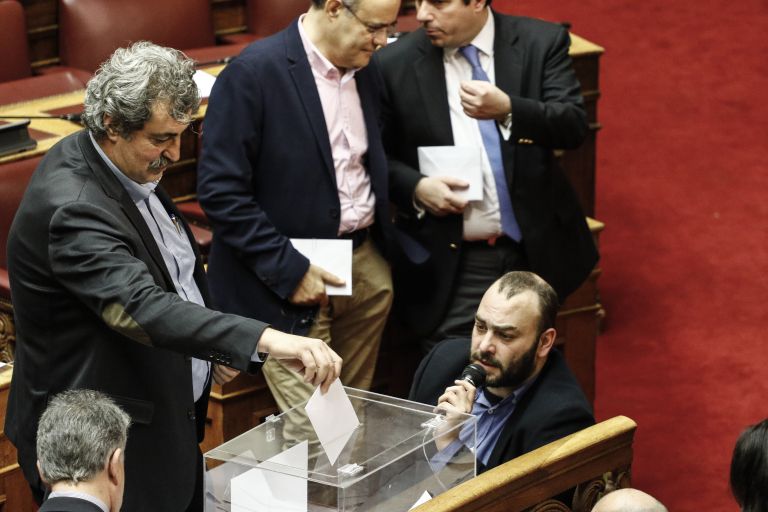 A New Democracy proposal to conduct a preliminary criminal investigation on alleged wrongdoing in drug pricing by three Syriza ministers was voted down by the ruling majority in a parliamentary vote last night.

For Kouroumplis, 151 MPs directly or indirectly voted down the proposal, there were 86 yes votes, one “present”, and 29 spoilt ballots.

In the ballot on the sitting minister, Xanthos, 145 MPs rejected the proposal, while there were 88 yes votes, one “present” vote, and 33 spoilt votes.

On the party level, only the neo-fascist Golden Dawn party supported the New Democracy proposal.

The Greek Communist Party (KKE) and the Centrists’ Union party abstained from the vote.

Prime Minister Alexis Tsipras said New Democracy’s proposal was a “poorly-staged diversionary tactic”, as ND ministers are being probed in the Novartis case, while government spokesman Dimitris Tzanakopoulos called it a “political Waterloo” for New Democracy.

The PM and main opposition leader Kyriakos Mitsotakis used the debate to send a stern message to Turkey that Greece’s sovereignty will be defended at all costs.

Tsipras said that the sovereign rights of Greece and Cyprus are non-negotiable. “They cannot play games with Greece,” he declared.

Mitsotakis said that there is no chance of Greece’s negotiating even the slightest bit of Greece’s sovereignty and territorial integrity.

“We Greeks know how to defend our rights and national interests,” Mitsotakis said, and went on to blast Ankara’s move to capture and imprison two Greek army officers.

“We are not a revisionary force. We do not seek territory from anyone. But we will not negotiate a centimetre of our territory,” the ND leader said.