Tsipras, Karamanlis and the underground currents 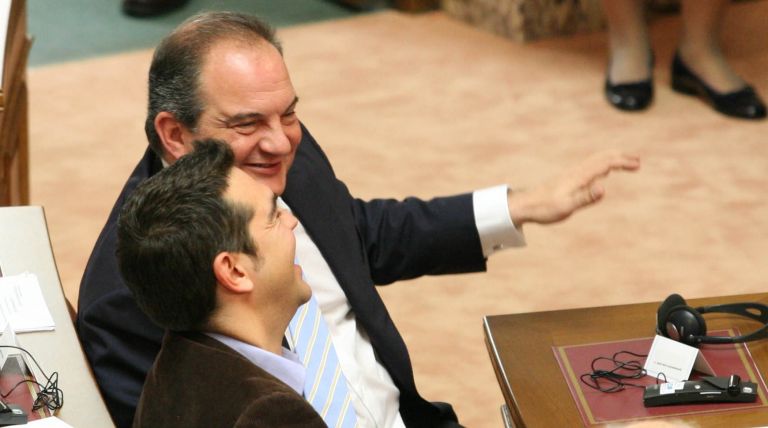 Despite his urgent warnings not to veer away from the bailout reform programme, Stournaras says that he is almost certain that Greece will exit the crisis, that there is an unhindered upward trend in the economy, and that it is necessary for the government to serve out its four-year term in office so as not to threaten that upward course with political uncertainties.

Those in the know are aware that former prime minister Kostas Karamanlis shares the same views.

He believes that the Greek crisis has lasted so many years because the political parties could not attain a minimal level of mutual understanding in order to agree to a common line on how to manage it.

Though many criticise him for not taking the necessary measures to avert the crisis, Karamanlis’ supporters note that he had tried unsuccessfully to reach a consensus position with then Pasok leader and later prime minister George Papandreou, and that the latter refused.

It is to this firm belief of Karamanlis in the need for national consensus, and to his perceived sympathy for the prime minister, that many attribute the rumoured back-channel contacts of the Karamanlis camp with Prime Minister Alexis Tsipras.

They say that Karamanlis believes that Tsipras succeeded in key areas where he himself had failed, such as in clashing with corrupt interests.

They also discern a cooperation between Tsipras and Karamanlis in the PM’s nomination of President Prokopis Pavlopoulos for the state’s highest office, and in the appointment of a former Karamanlis minister, Dimitris Papangelopoulos, as alternate justice minister.

Many say that President Pavlopoulos also has become an entirely informal back-channel of communication between the current and former prime ministers.

Karamanlis appears to be keeping his distance from New Democracy leader Kyriakos Mitsotakis’ bellicose stance towards the government. Karamanlis’ supporters appear sympathetic to the social policies and other choices of Tsipras, and they are concerned about New Democracy’s perceived difficulty in communicating with society. They are also wary of the conservative party’s early lead in opinion polls.

New Democracy MPs in Karamanlis’ camp reportedly feel alienated from Mitsotakis, as the former PM remains for them an iconic hero, and they look forward to the moment when he will return to unite the country and save the day, as his uncle, the late president Constantine Karamanlis, did immediately after the fall of the Greek junta, in July, 1974.

Karamanlis himself is said to be opposed to early elections, at least not before May, 2019, when general elections could be combined with European Parliament elections, as that would interrupt at a crucial juncture Greece’s path towards exiting the crisis.

That would allow time for the government to succeed in a deal to restructure the Greek debt and facilitate a successful return to the markets. That also appears to be the view of the country’s major economic players.

Karamanlis’ interlocutors say that he expects a Mitsotakis victory in the next elections by four or five percentage points, which might lead to all-party national salvation government, naturally without the neo-fascist Golden Dawn.

If that happens, according to those near him, Karamanlis apparently would be prepared to lead, once again.