“The crisis is ending in the same place where it began, in the South, with the exit of Greece from fiscal adjustment programmes this coming August,” Tsipras declared. 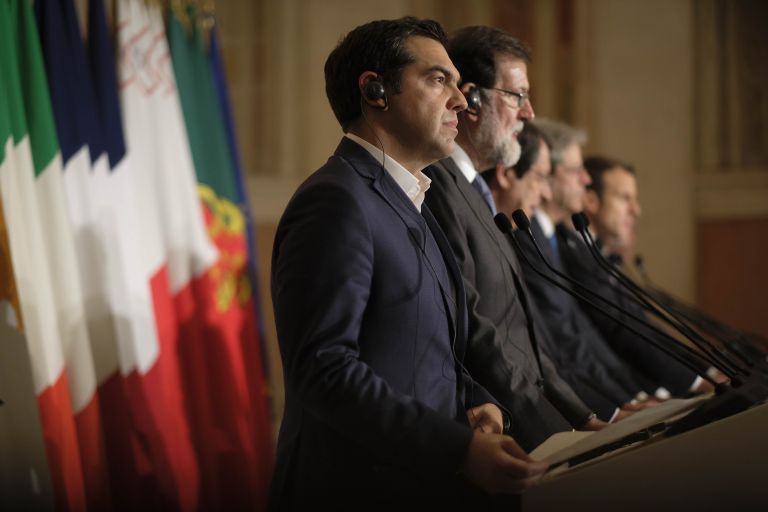 Prime Minister Alexis Tsipras called for deep reforms in the eurozone, with an eye to making the operation of the monetary union more democratic and more oriented toward social cohesion and the human needs of its citizens.

Tsipras was speaking at the fourth summit of the EU’s southern European countries in Rome, where the leaders of the seven members of the group, which meets periodically to discuss common problems in the European South,exchanged views on the migration crisis, investments and growth, the operation of the eurozone, and energy security.

“The crisis is ending in the same place where it began, in the South, with the exit of Greece from fiscal adjustment programmes this coming August,” Tsipras declared.

“Today, we should be talking about Europe and our common future, not with the language of the crisis, but with the languages of shared principles and values. If there is one thing missing today from Europe, it is not rules on fiscal adjustment and their implementation. Missing are common rules regarding solidarity and social and economic convergence,» he stressed.

“Only if Europe changes can its citizens have a propitious future, but that is not enough. We must not repeat our mistakes,” the PM said, calling for daring reforms.

“The year 2018 can be a landmark, with the end of the European crisis. Yet, the issue is not only to exit the crisis, but to be vigilant and prevent the outbreak of a new crisis in Europe,” the prime minister said.

Tsipras also underlined the need for the Aegean to be a sea of peace and cooperation, without threats, and in which international law will be respected by all of Greece’s neighbours.

Cypriot President Nikos Anastasiadis said he briefed his counterparts on Cyprus’ extensive hydrocarbons programme and regarding Turkish challenges to the sovereignty of the Republic of Cyprus in its Exclusive Economic Zone.