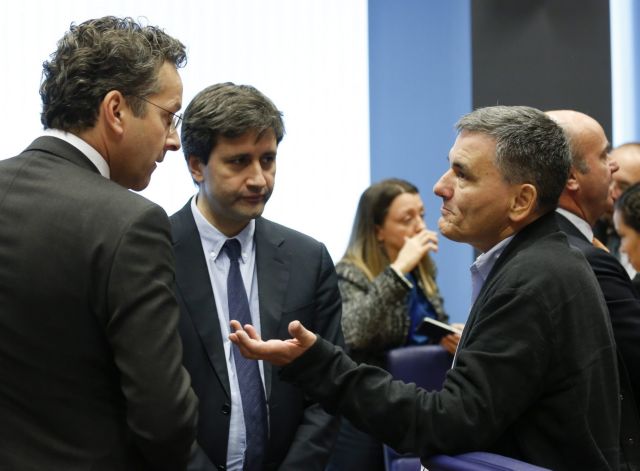 The European Union’s Finance Ministers convened on Monday and decided to split the 2.8 billion euro tranche into two, with the payment of the first portion of 1.1 billion euros being approved. The remaining 1.7 billion euros will be paid after the Euro Working Group convenes on 23 October and the Hellenic State has made “significant progress […] towards the clearance of net arrears”. This development had been announced earlier by Germany’s Finance Minister Wolfgang Schäuble.

Eurogroup chairman Jeroen Dijsselbloem commented that “we heard from the four institutions on the completion of the implementation of the 15 open milestones which enables us all to close the first review. Important reforms have been undertaken on pensions, energy sector, bank governance, as well as on the setting up of the privatization fund and the revenue agency”.

“This progress enables the ESM to disburse 1.1 billion euros remaining under the second tranche. There has also been substantial progress on arrears clearance in July and August, which is essential to strengthen the economic recovery. Technical work will continue to gather the September data. This always takes a number of weeks to complete these data, so that cannot be helped, it cannot be done faster. We hope and presume that before the end of October those data are available” he further noted.

According to the Eurogroup chief the data “will then be assessed by the institutions and on that basis the ESM Board of Directors could decide on the disbursement of 1.7 billion euros. So this is specifically for the clearance of arrears. So that’s also good news”, adding that “we will now focus on the second review, which we expect to be completed swiftly and we will come back to that in next meetings”.

In a statement that followed the meeting, the Ministry of Finance issued a statement explaining that the Eurogroup approved the 1.1 billion euros as all milestones have been implemented. The Minister added that the remaining 1.7 billion euros will be paid out after the official divs of arrears for July and August are made available alter in October.

In the heated debate in Parliament on corruption and vested interests, the main opposition party leader Kyriakos Mitsotakis claimed that the Finance Minister Euclid Tsakalotos announced that Greece does not the remaining 1.7 billion euros of the tranche. The Prime Minister Alexis Tsipras referred Mr. Mitsotakis to the comments of Eurogroup chief Dijsselbloem on completion of the 15 milestones.

The official statement of the Eurogroup

The Eurogroup welcomes the implementation by the Greek authorities of the set of 15 milestones in the context of the first review of the ESM programme. The Eurogroup commends the Greek authorities for adopting the necessary further measures to reform the pension system and the energy sector, to strengthen bank governance, to fully establish the new independent Revenue Agency and to proceed with the privatisation programme. The Eurogroup also notes the further progress in the set-up of the Privatisation and Investment Fund – the Hellenic Corporation of Assets and Participations (HCAP). The Eurogroup stresses that the appointment of the members of the Board of Directors of HCAP, including the Chairman and CEO positions, must be pursued as a matter of priority in order to make the fund fully operational before the end of 2016, in the context of the second review of the ESM programme. To this end, we welcome the commitment of the Greek authorities to ensure that the appointment process is in line with the requirements of the HCAP law to ensure that Board members are fully independent, professional and with clear experience and the corporate governance standards will be in line with international best practices.

The implementation of the milestones paves the way for the ESM Board of Directors to approve the remaining disbursement of EUR 1.1 bn under the second tranche for debt servicing needs.

The Eurogroup acknowledges that significant progress has been made towards the clearance of net arrears during July and August and notes the time required for completing the data for September, which would be later in October. The institutions’ positive assessment of Greece’s clearance of net arrears would pave the way for the ESM Board of Directors to approve the further release of EUR 1.7 bn, which will be disbursed to a dedicated account to be used for arrears clearance.

The Eurogroup will now turn its attention to the next stages of the ESM programme. We call on the Greek authorities to intensify their work with the institutions on the measures needed to complete the second review in a timely manner, and welcome the intention of the institutions to return to Athens in mid-October 2016.