This is the mysterious “Griffin warrior” from ancient Pylos

The resident of a tomb located next to the Mycenaean palace of Nestor, the so-called… 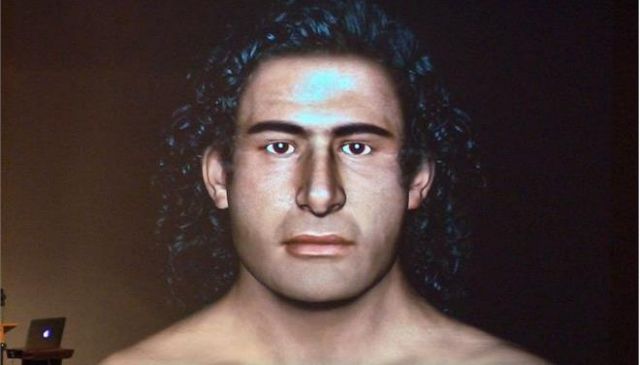 The resident of a tomb located next to the Mycenaean palace of Nestor, the so-called “griffin warrior”, appears to have had long black hair and was 30 to 35 years old at the time of his death. The findings of the tomb, which dates back to about 1500 BC, were presented by archeologists Jack Davis and Sharon Stocker of the University of Cincinnati who discovered the unplundered tomb in the summer of 2015.

According to the Dr. Stocker, the warrior appears to have been a handsome man, with the facial reconstruction having been based on a stamp that was found inside the tomb. The reconstruction was carried out by Lynne Schepartz and Tobias Houlton of the University of the Witwatersrand in South Africa.

Aside from the remains of the griffin warrior, the archeologists discovered precious stones, gold rings and cups, a bronze sword with a gold platted ivory hilt, a rare gold chain, silver cups and bronze containers. Many of these items were in a Minoan style, which initially suggested that they may have been plundered from a raid in Crete. Among the findings though were some unexpectedin items, such as combs and a mirror. Dr. Stocker suggested that they may reflect the custom of combing hair before battle.

The “griffin warrior” got his name from two items inside the tomb wheich depict a griffin, with the archeologists stating that the mythical creature represented a well-known system of power in Pylos, similarly to the case of Minos in Knossos.