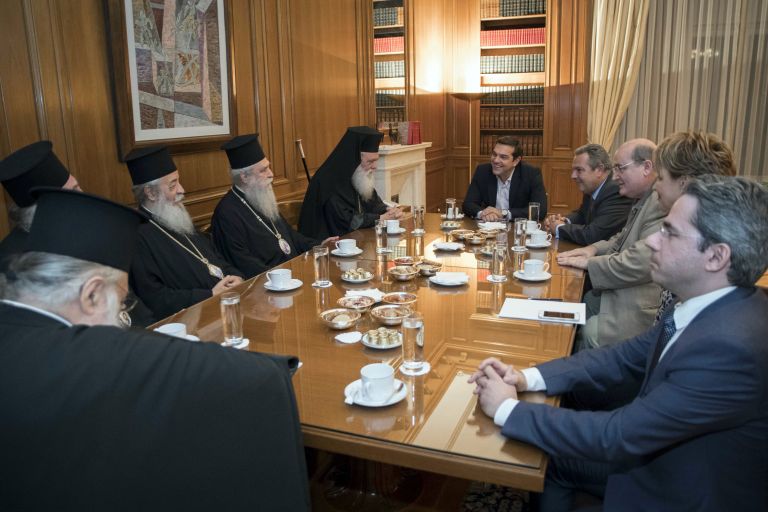 The recent problems in the relationship between the Church and State were discussed between Prime Minister Alexis Tsipras and Archbishop Ieronymos on Wednesday evening in an effort to overcome the recent crisis.

Also present at the meeting were the Ministers of National Defense Panos Kammenos, Education Nikos Filis, as well as government spokesperson Olga Gerovasili. The Archbishop was accompanied by the Metropolitan Bishops of Sparta Eftasthios, Fthiotida Nikolaos, Mesogaia Nikolaos and legal adviser Theodoros Papageorgiou.

The government side argued that the circular regarding the religious education course in schools cannot be repealed; however it can gradually be improved in coordination with the Church, with a full review at the end of the year.

The Church officials complained about recent statements from the Education Minister, specifically on how “the Church has contributed to the moral decline of society”, as well as that the religious education reform was carried out without a final discussion.

In response the government expressed its frustration over the Archbishop’s recent statements on the Left and underlined that a debate took place. As argued during the meeting, close associates of the Archbishop participated in the drafting of the new school program.

Eventually both sides agreed that there is a need for a mutual, dignified compromise for both sides. The Education Minister also noted that he has no problem revising his statement on the Church’s contribution to the moral decline of society. Church sources estimated that a lot need to be done, but that Wednesday’s meeting was a first step. It remains to be seen how this may affect the rumored cabinet reshuffle.