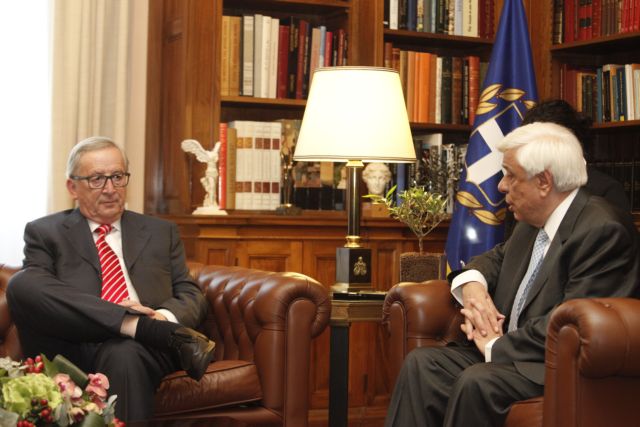 The President of the European Commission Jean-Claude Juncker was received by the President of the Hellenic Republic Prokopis Pavlopoulos at around 11am on Tuesday. Mr. Juncker will later meet with PM Alexis Tsipras and participate at the annual general meeting of SEV as a keynote speaker.

During the meeting President Pavlopoulos argued that Greece has done everything has been required and asked for the support of the institutions in carrying on with the efforts. The Greek President also stated that Athens is not seeking a “haircut” of its debt, but rather relief as outlined in the ESM’s regulations.

Finally, Mr. Pavlopoulos praised the efforts of the European Commission President in the effort to keep Greece in the Eurozone, which he estimated “secured the unity of Europe” and noted that “Greece cannot exist without Europe, but Europe can also not exist without Greece”.

Mr. Juncker agreed with the Greek President, arguing that Greece and Europe ‘go together’ and expressed his pleasure at returning to Athens. The EC chief explained that Greece still has some distance until it returns to prosperity, but added that the Greek efforts are being recognized.

The European Commission President further noted that for the first time the bailouts will not be on the agenda with Greece, but rather the refugee crisis. Mr. Juncker also praised the Greek efforts in addressing the crisis and stressed that Europe must stand in solidarity to Greece, which is more exposed to the crisis than other countries.