Clashes between refugees and police at Moria hot spot

Minor scuffles broke out at the Moria hot spot on the island of Lesvos on Tuesday, when unaccompanied minors clashed with the… 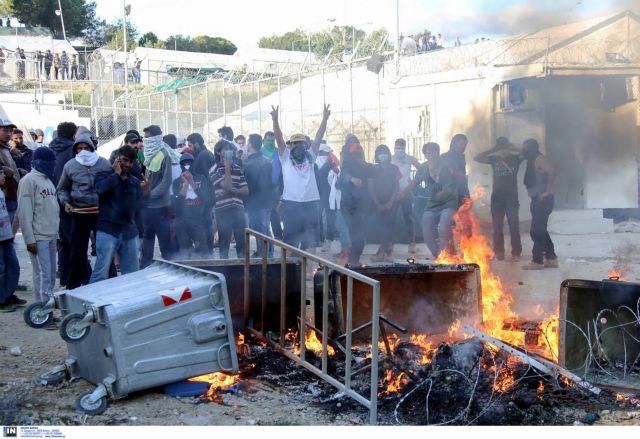 Minor scuffles broke out at the Moria hot spot on the island of Lesvos on Tuesday, when unaccompanied minors clashed with the police. About 3,500 people are currently at Moria, awaiting their asylum applications to be examined.

Reports suggest that the minors held at the hot spot reacted to the visit of the Alternate Minister of Migration Yannis Mouzalas and his Dutch counterpart. About 10 refugees are believed to have been injured in the clashes with the police, with being hospitalized.

Police officers stated that while the situation is currently under control at the hot spot, strong police forces are on stand by. The Minister told the Athens-Macedonia News Agency that “such phenomena will occur” and downplayed the incident.

Mr. Mouzalas attributed the clashes to pre-existing tension among the people held at the hot spot and praised the police intervention. Journalist Andrew Connely documented and reported on Tuesday’s clashes via his twitter profile.

Rioting at #Moria started with the many unaccompanied kids detained inside. Many reports of police beating, tear gas pic.twitter.com/Ooxm4kOA5X