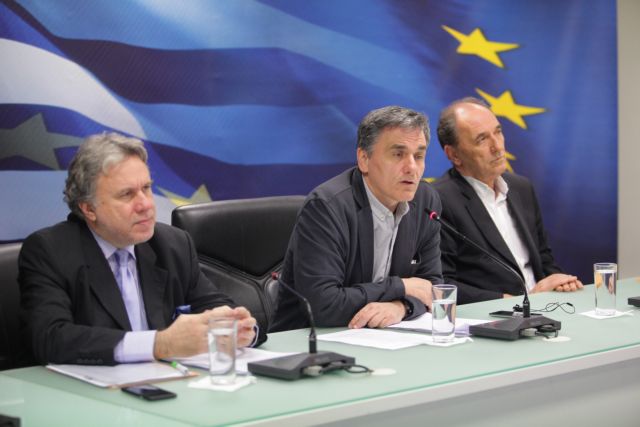 The Ministers of Finance Euclid Tsakalotos, Economy Giorgos Stathakis and Labor Giorgos Katrougalos gave a press conference on Tuesday, where they announced that the Greek government will submit two bills in Parliament next week, on the income tax reform and the other on the pension system reform.

Mr. Tsakalotos commented that “the Greek government is a sovereign government” and further explained that that while it is right to have bailout targets and take into consideration the views of the institutions, the Greek government has the final word on achieving these goals.

During the press conference Mr. Tsakalotos avoided referring to the submission of these two bills as a “unilateral action” and clarified that there was no falling out with the institutions.

In relation to the first bill announced, the Finance Minister announced a single tax scale for income derived from wages, pensions and business activities, while income from rent will have three tax scales, dividends will be taxed 15% and the solidarity tax will have a ‘marginal rate’. Later on the Ministry of Finance announced that the income tax scales are as follows:

Regarding the second bill, the Minister of Labor Giorgos Katrougalos underlined that an agreement would have been reached, but the IMF’s spring meeting suspended talks. Mr. Katrougalos noted that small and medium-sized supplementary pensions will be unscathed and that the EKAS solidarity grant will not be abolished.

Furthermore, the Minister explained that the national pension will be 384 euros, while 80% of self-employed will end up paying fewer contributions. He also noted that 80% of employees will earn higher pensions than at present. Mr. Katrougalos concluded that “we will accept improvement proposals from the institutions, but there is no room for cuts”.