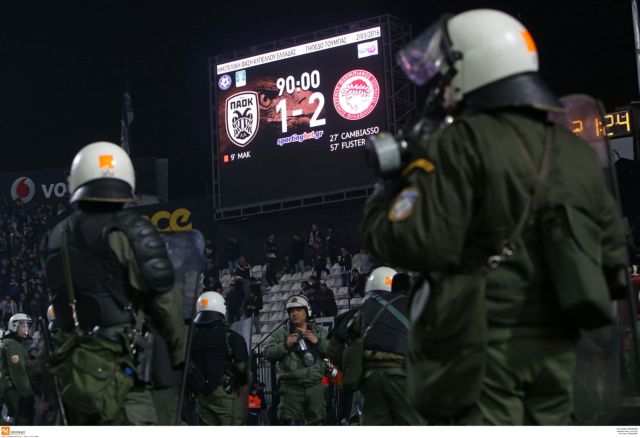 The first semi-final for the Greek Cup between PAOK and Olympiacos never ended and was marred by violence and a hooligan invasion in the final minutes of the derby,

There was major tension during the game, which saw PAOK take the lead early on, thanks to a goal by Mak (9’). Olympiacos however managed to level the match by half time with a header by Cambiasso (27’).

In the second half though the “Reds” took the reign of the match and scored a second goal with Fuster (57’). This development caused frustration amongst the PAOK, who a couple minutes later hit Olympiacos coach Marco Silva with a glass of water. The referee, who was within his right to immediately suspend the game over this, decided to carry on.

In the final moments of the game, Mak demanded a penalty after colliding with Olympiacos goalkeeper Kapino. The referee however rejected the call, which in turn angered the PAOK fans, who began throwing flares and fire crackers. The two teams shortly afterwards left the pitch, as fans began clashing with the police.

Eventually the two teams tried to resume the game, however the hooligans prevented this from happening and carried on clashing with the riot police. As such the game was suspended.

After the match PAOK chairman Ivan Savvidis blamed national football association (EPO), referee and Olympiacos for provoking his team’s fans. He also claimed that his team will not attend the scheduled rematch in Piraeus, unless the game in Thessaloniki is repeated.