Varoufakis: “We will not accept tranche in exchange for a bailout extension”

The Minister of Finances Yanis Varoufakis declared that Greek government’s intention to not receive the remaining 7.2 billion… 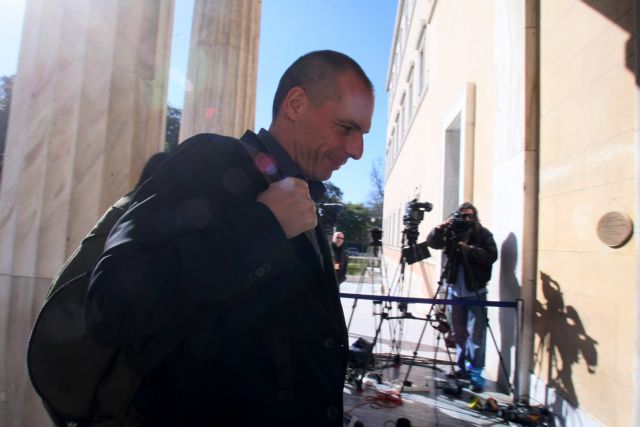 The Minister of Finances Yanis Varoufakis declared that Greek government’s intention to not receive the remaining 7.2 billion euro tranche, if it means that the bailout agreement is to be extended, while also responding to a recent interview by Eurogroup chief Jeroen Dijsselbloem.

Mr. Varoufakis countered Mr. Dijsselbloem’s claim that Greece must implement the bailout-mandated reforms to receive the 7.2 billion euros, by explained that the government is not legitimized to implement the bailout agreement. An extension of the bailout agreement would also mean the prolongation of the dramatic situation in Greece. He argued that “we could have signed the ‘Hardouvelis email’ and received the money. The people did not vote for that though”.

By the end of March to early April the Ministry will have completed its consultation with its European partners regarding the reforms that will be taken, so that the review can continue. Mr. Varoufakis explained that “they will not tell us ‘implement these measures or you will not receive the installment’. We agreed that we will implement the measures we propose and we will be judged on those”.

The Finance Minister also elaborated on an earlier comment, that there are plans to introduce an emergency tax for the wealthy, clarified that the tax will be applied to those “who did not pay taxes, even though they could”. Regarding VAT reforms, he admitted that the current 23% rate is “too high” and argued that a 15%-16% is more reasonable. Mr. Varoufakis hinted that the VAT in tobacco, alcohol and gambling may increase.