Dragasakis: “We recognize binding loan agreement and reject the bailout” 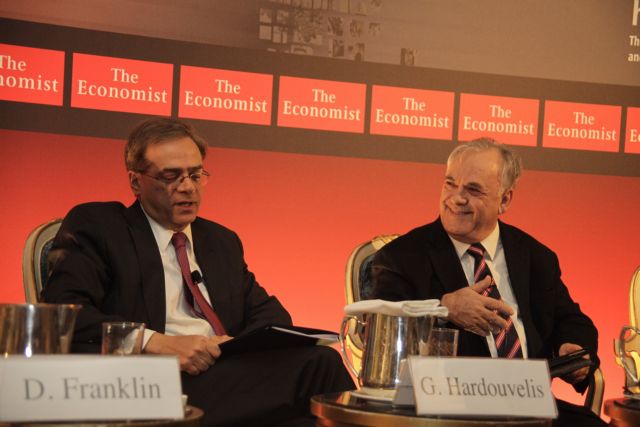 The Minister of Finances Gikas Hardouvelis and SYRIZA candidate Yannis Dragasakis both appeared at a conference organized by the Economist in Athens on Tuesday evening.

The SYRIZA MP [pictured right] separated the loan agreement from the bailout, arguing that his party accepts the former and intends to renegotiate it, while rejecting the bailout, which it will replace with its own program. During the discussion that followed, Mr. Dragasakis noting that should his party come to power it will not strive to complete the outstanding troika review. He further explained that he would discuss the relevant mattes with each of the troika’s members, but not the troika as a whole.

Mr. Dragasakis stressed that SYRIZA will not overturn capitalism, but work towards saving society. He maintained that the Greek people’s will must be respected, otherwise there is a problem with democracy. The SYRIZA candidate responded to rumors of talks with Berlin asserting that his party is not involved in “secret diplomacy”. He also said that “we will ask for time to present our program, which will have four points”.

The Finance Minister [pictured left] warned that there will not be a lot of time available after the upcoming elections and that due to the strict deadlines in place, many decisions will have to be made in a short time. Should there be delays the EU and IMF’s 7.2 billion euros may be at risk, along with the 11.4 billion from the EFSF, while the ECB may cut off liquidity in March.

Mr. Hardouvelis further claimed that the Greek economy would suffer from the political uncertainty and cited the recent application for ELA support by the Greek systemic banks as a prelude of things to come. The Minister of Finances noted that the State may be late or suspend payments, which in turn would cause further funding problems.

In concluding his speech, Mr. Hardouvelis joked that “if I haven’t scared you yet with what I said, I can scare you some more; imagine having the same Prime Minister and Minister of Finances for four more years”.