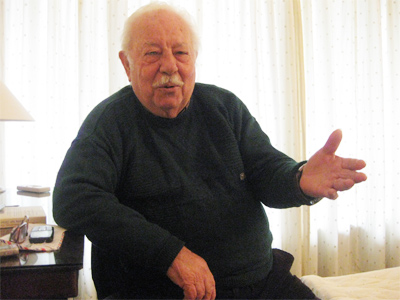 The documentary Viet Costas by Yannis Tritsimpidas has received one of the two “Erasmus” EuroMedia Sponsorship Awards at the event ceremony that took place on Friday the 10th of October in Vienna.

Tritsimpidas’ documentary tells the extraordinary story of Kostas Sarantidis (pictured) from Thessaloniki. In 1943, at the age of 17, Sarantidis was sent to hard labor in Germany by the Nazi occupiers. On the way, having helped a German unit, he managed to escape to Vienna, where he survived by pretending to be German.

After the end of the war Sarantidis headed to Italy and later joined the French Foreign Legion in Algeria. Sarantidis later found himself fighting against the Viet Minh in Indochina, to whom he later defected. Sarantidis adopted the name Nguyen Van Lap and fought on the side of the Viet Minh. He lived in Viet Nam for about twenty years before returning to Greece.

Prior to the “Erasmus”, the documentary had received the first prize at the Halkida Documentary Festival in 2012. The documentary was praised for “highlighting an unknown hero” along with stressing the memory of war and historic review.