Pope Francis to Tsipras: “Inconceivable to save banks and not people” 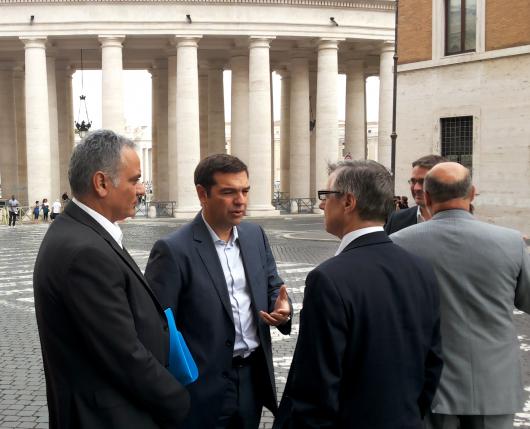 The Thursday midday meeting between Pope Francis and SYRIZA president Alexis Tsipras in the Vatican concluded after about twenty minutes. The two also had an extensive discussion on immigration, agreeing that every possible effort must be made in order to avoid any further deaths in the Mediterranean Sea.

Based on early reports, the head of the Roman Catholic Church praised young politicians for «speaking a different language» which resembles a «melody of hope«. The Pope also referred to a “crisis of values” and that it was inconceivable to save banks and not people.

After the meeting, the opposition leader noted that “the Left and the Christian Church have different starting points but meet at the same core values; solidarity, love for the fellow man, social justice and world peace”. Mr. Tsipras added that he asked the Pope to “continue fighting against poverty, talking about people’s dignity and the structural cause of poverty”.