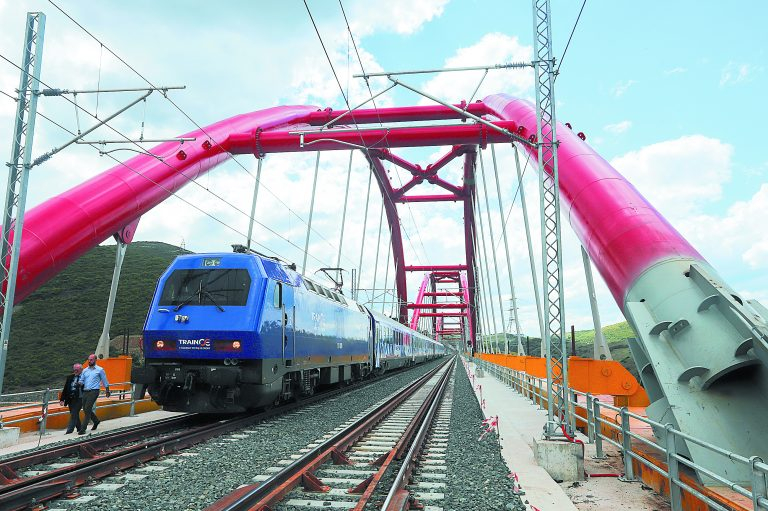 The clock for European funding of three key railway projects, totaling 3 billion euros, which will strengthen the country’s development prospects and geopolitical role, has begun to tick. According to information, railway network  project manager ERGOSE, has officially submitted the funding requests to Connecting Europe Facilities II (CEF II) for the two projects belonging to the Greek side of the Bosphorus Bypass, as well as for the traintracks to connect to the port of Patras.

In order to achieve the best possible mix of funding for the two major projects in Northern Greece, the requests were made in sections, as they have a huge technical scope and a high budget. The two projects, which are included in ERGOSE’s gigantic 4 billion euro package, concern the upgrading of the existing Alexandroupolis-Ormenio line, with a budget of 1.07 billion euros, and the construction of a new railway line in the Thessaloniki-Toxotes section, with a budget of 1, 68 billion euros.

The ERGOSE mega project that bypasses the Bosphorus

In particular, Alexandroupolis-Ormenio was divided into two sections, Alexandroupolis-Pythio and Pythio-Ormenio. The request to CEF II concerns the whole budget. As for Thessaloniki-Toxotes, its final section from Nea Karvali to Toxotes Xanthi has already joined CEF II with 250 million euros. So the new request concerns a budget of approximately 1.43 billion. euros for the sections Thessaloniki-Nea Madytos and Nea Madytos-Nea Karvali.

The latest request to the “Connecting Europe” mechanism is for the project of completing the new double railway line of Patras, in the long-suffering section that will connect Rio with the new port of Patras. The budget of the project amounts to 477 million euros.

The division of funding requests does not, according to information, create any problems in the course of ongoing tenders, as all three projects have the assurance of the Public Investment Program. Essentially, the procedures for “locking” funding sources run parallel to the tenders. Currently, the set of six tenders proceeding with the design-build method has entered Phase B, that of the competitive dialogue. This is the main course of the process. In this phase, the basic technical, financial and legal parameters will be determined in order to find the best solutions in cooperation with the prospective contractors. The projects are claimed by GEK TERNA-Intrakat, Aktor-Mytileneos and Avax-Alstom. The aim is to submit the binding offers within the first half of the year. With pre-election processes underway, this is certainly an ambitious goal.

In any case, ERGOSE has also made contact with the European Investment Bank (EIB), so that it has at its disposal another possibility of financing. These have resulted in a pre-approval in principle of future financing of the projects in question through a loan agreement, which, however, is presented as a last resort.

The role of the war in Ukraine

The developmental importance of all three railway projects is great. These are part of the trans-European transport networks, even connecting three integrated ports: Patras, Thessaloniki and Alexandroupolis, which recently entered the map of European corridors. These characteristics, in combination with the good preparation and sustainability of the projects, are also the key to their financing by CEF II.

However, Russia’s invasion of Ukraine changed the balance in Europe. Although, according to information, all the individual conditions for the approval of the projects were given the “green light”, they were ultimately left out of the previous invitation. This is explained by the fact that most of the available resources were channeled head-on into Poland, given the heavy burden it bears due to the war in Ukraine. This reversal could not have been foreseen.

The value of the projects for Northern Greece

The two projects in Northern Greece make up the so-called eastern Egnatia railway. They will improve cross-border connections with Bulgaria in Ormenio and Turkey in Pythio. At the same time, they will create the possibility of operating a suburban line for the areas along the Evros.

The venture was revived last November, when the Greek side proposed the immediate appointment of new members to the relevant Task Force by both states, in order to update goals and milestones, in order to reach a draft agreement for the consortium that will run the transnational project.

The mega project will create a land freight bridge that will bypass the Bosphorus Strait. In this plan, Thessaloniki and Kavala will become ports of exit for all Southeastern European products, while Alexandroupolis will emerge as a transport and infrastructure hub, as well as an energy hub for the wider region. The overall planned project aims to increase rail freight capacity in Eastern Europe via an alternative route that avoids congestion at the Bosphorus Straits, while reducing the time and cost of freight transport.