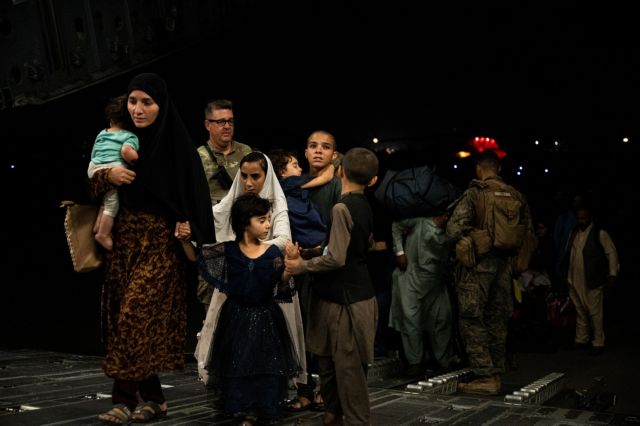 Evacuees board an aircraft as the U.S. Department of Defense is committed to supporting the U.S. State Department in the departure of U.S. and allied civilian personnel from Afghanistan, and to evacuate Afghan allies safely, in this recent undated handout picture. Staff Sgt. Brandon Cribelar/U.S. Air Force /Handout via REUTERS THIS IMAGE HAS BEEN SUPPLIED BY A THIRD PARTY

Prime Minister Kyriakos Mitsotakis maintains that countries near Afghanistan must be supported in order to receive those who want to flee the country and reside at a small distance from their homeland.

The Greek government is signalling on many levels that it will not permit prospective irregular refugee flows from Afghanistan.

Prime Minister Kyriakos Mitsotakis maintains that countries near Afghanistan must be supported in order to receive those who want to flee the country and reside at a small distance from their homeland.

Mitsotakis argues that Greece has already shouldered a great burden in the refugee and migrant crisis because it is the external border of Europe.

The PM says the government’s outlook as regards the protection of land and sea borders and the legal framework for processing asylum applications “is clearly different than the policy implemented by then ruling SYRIZA in the 2015-2016 period”.

Government spokesman Yannis Economou said, “There is no chance that we shall relive the chaotic moments of 2015 and leave the country open to all.”

In that framework, the Centre of Border Guarding of Orestiada at Heimonio in the Evros region has been placed on a high state of alert.
The government says that Greek forces patrolling the land borders are prepared to demonstrate the same effectiveness as they did in February and March, 2020, when Ankara sent thousands of refugees and migrant to the Evros land border to push them into Greece.

At sea, the Hellenic Coast Guard is also at a high state of alert and are patrolling the Aegean day and night.

A major operation at Evros is in full swing and that includes the building of a 38-kilometre-long wall with a height of between three and five metres.

Meanwhile, there will be extensive work to fortify 57 border guard posts and monitoring facilities.

The government plan also provides for the installation of cameras along the Evros borderline.

Drones will be used that can conduct surveillance 10 kilometres toward Turkish territory.

An Evros border monitoring operation with a blimp has already commenced and 250 more border guards will be hired in the immediate future.

In the Aegean, the islands of Lesvos, Chios, and Samos have been placed on high alert as Turkish human trafficking boats have long illegally transported migrants to these islands.

Border guards from the mainland are expected to be dispatched there.