Marinakis on government : ‘Liars and traitors do not change, they simply get worse’

The Piraeus City Council candidate and Olympiacos FC leader said that at the most critical juncture in Greece’s recent history the country had the ill fortune to be led by “uneducated kids who negotiated the country’s future”. 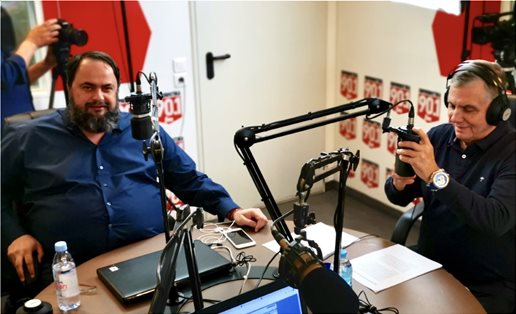 Evangelos Marinakis – in his capacity as a candidate for the Piraeus City Council on the Piraeus Victorious ticket and chief of the city’s  Olympiacos FC – today lambasted the government and PM Alexis Tsipras in particular  in a no-holds-barred interview with journalist  Yorgos Tragas on Parapolitika 90.1 radio.

Marinakis offered his observations on the current political situation, on Tsipras’ and the government’s attacks against him, on his vision for Piraeus and his view of former City Council member Petros Kokkalis, and on his passion for Olympiacos.

Regarding Tsipras and his inner circle Marinakis said that, “Liars and traitors do not change, but simply get worse.”

He said that at the most critical juncture in Greece’s recent history the country had the ill fortune to be led by “uneducated kids who negotiated the country’s future”.

Absolutely no interest in national politics

The leader of Olymiacos categorically dismissed rumours and scenarios that he is interested in entering the fray of national politics and declared that his sole passion is the Red and Whites.

As regards Tsipras and Attica prefect Rena Dourou – whom he has said he unfortunately supported before her election – Marinakis said that he had wrongly believed that these young politicians could make positive changes in the country.

Marinakis underlined his conviction that – in contrast to Tsipras, of whom he said that his ignorance in the field of economics is “tragic” – main opposition New Democracy leader Kyriakos Mitsotakis would be a better prime minister because he is educated and knows how to analyse a balance sheet.

Concerning talk of his having  links with New Democracy Marinakis said, “My ambitions are confined to Piraeus. I am happy with everything I am doing and I want nothing more. After all, when I want something I say it loud and clear and am not ashamed to say so because I simply cannot hide it. As polite as I want to be I cannot but say that this [scenarios] is disgusting. They are referring to two or three air conditioning units and computers worth a total of 1,000-1,200 euros that I donated [to the Piraeus ND branch office].

Marinakis was also asked if negative press reports against him affected his businesses, mainly as a shipowner.

“They created certain difficulties in their efforts but we are plying forward with major business deals abroad. We see that Greeks abroad can make great advances. In Britain they have a tradition in football and anyone who wants to become involved in football is subjected to exhaustive audits. Our file for Nottingham Forest FC [which he owns] did not have even the slightest problems,” he said.

When asked if the mudslinging against him affected him and his family, Marinakis was blunt and categorical.

“My family and those close to me know who I am. They are proud of me and of what I have achieved, just as I was proud of my own father,” he said.