Editorial: The final countdown has begun

It is by now obvious that the only thing that concerns Mr. Tsipras is to extend as much as possible his stay in power. That is why he had no dilemma in choosing between Kotzias and Kammenos when they clashed openly at the cabinet meeting. 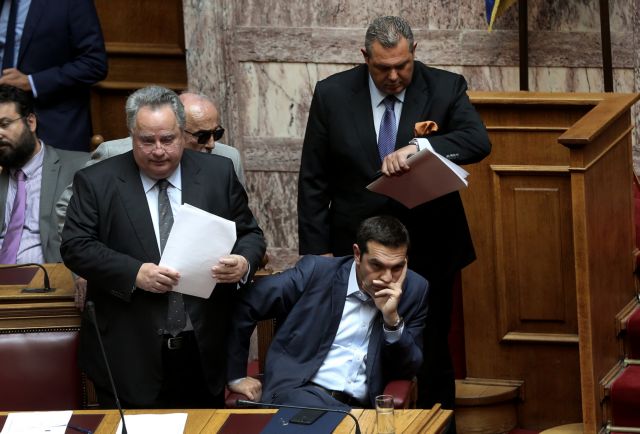 The situation in the government may have elements of farcical comedy, but that does not mean that it is any less dangerous.

One day the prime minister in a cabinet meeting called upon his ministers not to topple the government, and the next day he bid goodbye to a top minister who was the motive force behind the Prespa Agreement, for which supposedly the PM will do battle until the end.

The problem is that in that battle he chose to align himself with the minister who is undermining the agreement, his defence minister and coalition partner Panos Kammenos, and effectively sacked the minister with whom his ideologically akin, former foreign minister Nikos Kotzias.

It is by now obvious that the only thing that concerns Mr. Tsipras is to extend as much as possible his stay in power. That is why he had no dilemma in choosing between Kotzias and Kammenos when they clashed openly at the cabinet meeting.

That choice undermined the future of the government, as no one can trust the choices of his adventurist coalition partner. The latest events confirm that all the planning of the PM’s office is up in the air. The prime minister is unable to determine developments, and the situation in the government camp is completely unforeseeable, as many cadres are acting with a view to the next day.

Whether SYRIZA cadres like it or not, the person who will determine events is the chosen partner of their leader. The prospects of his electoral and political survival will determine the future of the government.

The clash of the two ministers and the effective sacking of Mr. Kotzias highlighted another important issue. The management of the black budget (earmarked for top-secret uses, which Kammenos accused Kotzias of mismanaging) is an issue that cannot be overlooked.

That is especially true for a government which came to power as the defender of the interests of the people, accusing everyone else of corruption and of supporting vested interests.

The issue of the defence ministry’s abortive sale of arms to Saudi Arabia may have been forgotten, but it seems that we will soon bear witness to other incidents of non-transparent, secret agreements.

Aside from what will happen in the coming days, depending on developments in Skopje, it is clear that the final countdown for this government has already begun.