Coalition government racing against time to close deal with troika 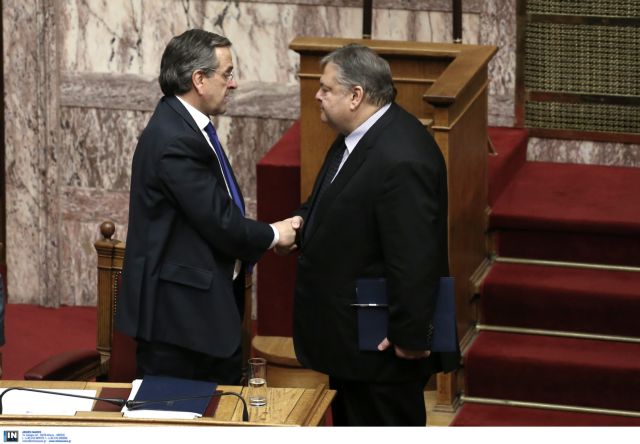 The Samaras-Venizelos coalition government is making a huge effort against time in order to come to an agreement with the troika. On Friday the government is scheduled to submit its budget for 2015 which the troika has not approved, arguing that that the budget deficit will be far greater than estimated.

The troika has revised its initial estimation of a 3.6 billion euro shortfall to 1.7 billion euros, as the government has committed to “interventions” in public utilities and local government bodies. Despite the problems though, the government is claiming that there is no need for concern.

New Democracy and PASOK officers have been meeting in order to agree upon a common stance in the negotiations with the troika. The government has so far rejected the troika demand for changes that will result in further wage and pension cuts and has resisted the call to increase the VAT rate.

The two government partners are willing to accept a two year “freeze” of pensions and to reduce contributions towards the self-employment fund OAEE, while simultaneously cutting services provided. There have also been suggestions of offering incentives against retirement, rather than changing the age of retirement.

The coalition government is also resisting the demands for a change of the provision for 100 installments and the legislation regarding strikes, but has agreed to unify all supplementary pension funds and to introduce changes to the legislative framework regarding union operation.