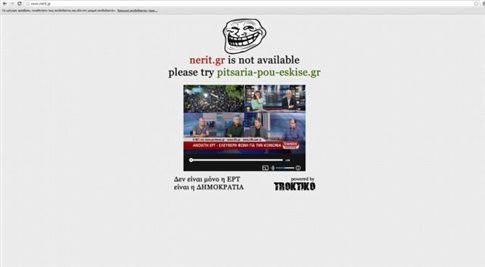 A day after the government announced its controversial plans to replace ERT with a new broadcasting service called “NERIT”, news blog “Troktiko” registered the domain name before the government! The website currently transmits ERT’s program.

When accessing the website, visitors are greeted by the familiar “troll face” and a message that “nerit.gr is not available” and to “please try pitsaria-pou-eskise.gr”, a reference to Prime Minister Samaras’ student past, when he used to operate a pizzeria.

According to a report by “To Pontiki”, as soon as this came to government’s attention, the National Telecommunications and Post Commission (EETT) attempted to claim the domain. Current legislation however only protects the names of places.

The government will either have to pay the individual who registered “nerit.gr” or come up with a new name for its internet platform.