History repeats itself: Those untested in battle degrade our heroes

“That is the historical memory of our country, and especially of those elements of it that are inextricably linked to our city, which we wanted to revive from the first moment Piraeus’ residents trusted our vision five years ago. 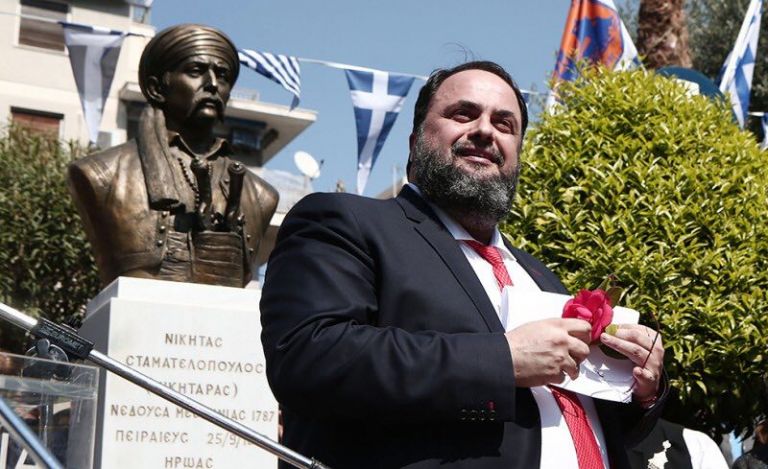 Hundreds of citizens of Piraeus (where he spent the end of his life in poverty) and beyond attended an emotional and patriotically charged unveiling of a bust of Greek Revolutionary War hero Nikitas Stamatelopoulos, better known as Niktaras the Turkophagos (Turk-eater,) on the eve of Greek Independence Day.

One of the greatest divs in the Greek War of Independence, Nikitaras found his place in Piraeus and in the hearts of all those who do not forget the people who died in the defence of faith and fatherland very nearly 200 years ago.
The event was held in the courtyard of the Piraeus old age home on 23 March and was packed with symbolism, moving moments, and clear messages.

The unveiling of the bronze bust of Nikitaras was an opportunity to call to mind memories of the 1821 Revolution and its heroes, and the fact that many of its leading divs were chased and mocked and died as paupers.
Such was the fate of Nikitaras, who in the last years of his life begged in order to survive very near the site where the sculpture was erected.

The donor, shipowner Evangelos Marinakis, addressed those attending the unveiling as follows:

“Ladies and gentlemen it is a great honour to donate a bust of the Greek Revolutionary hero Nikitaras in honour of my late father, Militades Marinakis, a man who was shaped by the diachronic principles of Hellenism and who truly loved Piraeus. He served these principles throughout his life. That is for me a constant source of inspiration to give to my country.

“It is important in an era of economic crisis which evolved into an unprecedented crisis of values to be able to look back on our glorious history and draw strength from the fighters of 1821 who sacrificed their lives for their principles and ideals and selflessly defended their right to freedom.

“That is the historical memory of our country, and especially of those elements of it that are inextricably linked to our city, which we wanted to revive from the first moment Piraeus’ residents trusted our vision five years ago.

“Along with infrastructure projects and our social policy interventions, we made it a top priority to highlight the historical and cultural legacy of Piraeus so that future generations of Piraeus residents can be inspired by it.

“Looking back at the life of Nikitaras, I would like to note his moniker, Turkophagos (Turk-eater), and the years he lived in Piraeus

“Nikitaras was called Turkophagos because he defended his fatherland from the fury of disaster and subjugation. Like all Greek Revolutionary War heroes he was a man with sensitivity and a deep spirit who fought vigorously against the conquerors, absorbed by the national and sacred passion for the freedom of the Greeks after four centuries of bondage.

“I stand in awe and contemplation regarding the end of Nikitaras’ life. “Be joyful for nothing before the end,” were Solon’s famous words to the fabulously wealth King Croesus.

“Nikitaras, one of the leaders of the Revolution of 1821, spent some of the last years of his life as a beggar in Piraeus, near the place where we erected his bust. That was the fate that the Greek state had in store for him, albeit it temporarily, to repay him for his contributions to the country.

“There are more such stories in Greek history. Another Greek revolutionary hero, Theodoros Kolokotronis, was shackled in prison by those whom he offered the supreme ideal of freedom. That was the award for his struggles and sacrifices.

“A few thousand years earlier, the city-state of Athens made Socrates drink the deadly hemlock to repay him for his contribution to Greek and global civilisation.

“Kimon of Athens was a similar case. He was ostracised from Athens for a long time despite his important contribution to shaping the super-power of the Golden Age of Pericles.

“Today, the government is again bringing to the forefront this negative tradition of our people.

“In order to disorient the public from accumulated, unsolved problems it is marring the reputation of some of the most prominent Greeks with a long and varied contribution to Greek society. It targets them to “punish” them for their place in public life through daily mudslinging and unprecedented character assassination, with the help of leading state functionaries.

“Indeed, in Greece’s long history one can find fitting role models. Through its travails over the centuries, light always wins over dark and true heroes and benefactors finally take their rightful place in our history.

“Let us hold on to the brilliant examples. Let us have as a compass the Greece of Kolokotronis, Nikitaras, and Karaisakakis, the monument that looms over the entrance to our city, Socrates and Kimon.

“Let us reject the contemporary Kolettis and the sick atmosphere that has today spread into every aspect of the country’s political and social life.

“In the free country that the heroes of 1821 bequeathed to us it is necessary, inspired by their ideals, for us to work hard and with honesty to sustain our families and contribute to the common good.

“Finally, I should like to thank Mr. Moralis,the Mayor of Piraeus, and Metropolitan Seraphim of Piraeus and Phaliro for undertaking the initiative to host today’s event.The mayor on a daily basis exerts a tremendous effort for Piraeus to be a viable, attractive, and human city. I was, am, and shall remain by his side so that all together we can continue to build the Piraeus of our dreams.”