It is at the very least odd that Kotzias, who resigned over his clash with Kammenos, has filed a slander suit while at the same time he steadfastly refuses to make public his nine-page resignation letter. 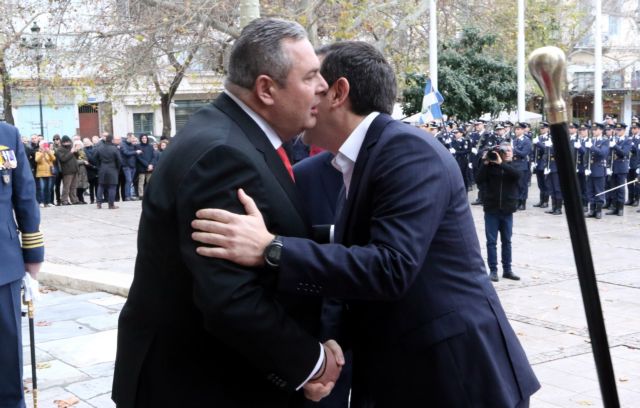 There is no historical precedent for two top cabinet ministers to threaten each other or to drag one other to court with mutual recrimination ns.

The public vendetta between former foreign minister Niko Kotzias and ex-defence minister Panos Kammenos is indicative of the ethos and demeanour of the current government and clearly demonstrates that the only cohesive substance of this odd former coalition was divvying up power. When that substance dissolved, it was revealed that the only thing that concerned them was their offices.

Kotzias’ lawsuit against Kammenos revealed the rabid hatred between them. Despite the constant messages Kotzias said that Kammenos was sending him with threats like, “Wise up or I’ll finish you off” or “I will publicly embarrass you and reveal your involvement with visas and with Soros’ partner so that you will be probed, and woe upon you if it emerges that there has been an [illegal] transaction.”

All that did not hinder their co-existence in the same government, with Mr. Tsipras simply presiding over the dispute between his two top ministers.

There have been clashes between government ministers in the past, but they never reached this degree of unprecedented wretchedness, with the PM remaining silent so as not to lose his valuable junior coalition partner, Kammenos.

It is at the very least odd that Kotzias, who resigned over his clash with Kammenos, has filed a slander suit while at the same time he steadfastly refuses to make public his nine-page resignation letter.

This may be because he does not wish to reveal the responsibilities of the PM who tried to preserve his alliance with Kammenos in order to remain in power.

Now that Kammenos has become a scapegoat for the PM’s office and his mission has been accomplished, Kotzias can sue without any risks.

This pitiful affair is yet another example of the decline and scorn for institutions that have been evident for quite some time.

The left-wing government that supposedly came to power to introduce a higher ethos in political life proved that it could not rise to the occasion.

It copied the worst elements of our political history, thus debasing the much-touted moral advantage of what used to be the Left.