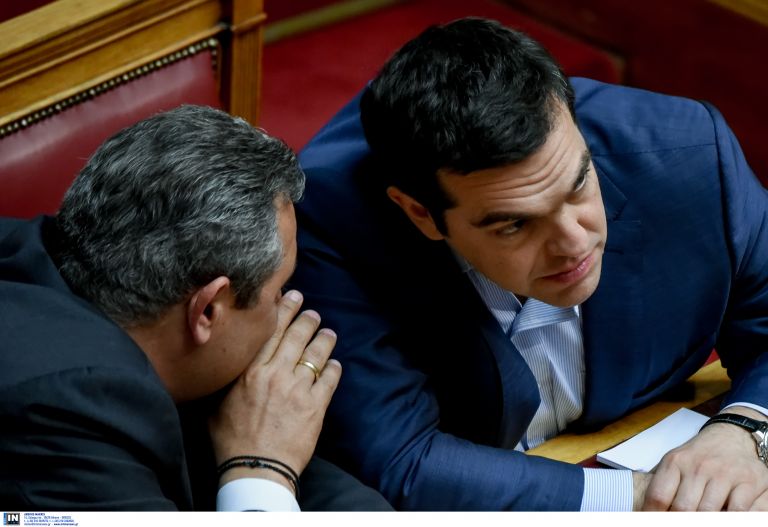 After a series of rifts in the ruling Syriza-Independent Greeks coalition on key issues such as the FYROM naming talks and the captivity of two Greek army officers in Turkey, Prime Minister Alexis Tsipras and Defence Minister Panos Kammenos are holding talks in a bid to find a new governmental modus vivendi.

Kammenos attempted to paper over the very public dispute between his MPs and those of Syriza, declaring that the ruling coalition is solid and will continue to the very end of the government’s term in office.

The Independent Greeks leader said that the coalition is “honourable and based on principles” and that the overarching aim of both parties is to lead the country out of the economic crisis and ameliorate its devastating social impact.

Still, Kammenos appeared to be digging in his heels on two key issues that have irked the PM, repeating his assertion that the two Greek army officers imprisoned by Turkey are hostages, and insisting that he rejects any FYROM solution that acquiesces to Skopje using the name Macedonia.

A composite name for FYROM – the name Macedonia with a geographic marker – is the cornerstone of Syriza’s proposals for a settlement.

The use of the word “hostages” to describe the status of the two Greek officers flies in the face of Tsipras’ strategy of downplaying their captivity and framing it as a routine border incident gone awry. Moreover, the use of the word hostage implies that some kind of exchange with Greece is behind Ankara’s move to capture the two officers in the Evros border region.

Hours before his meeting with Tsipras, Kammenos today added fuel to the fire by likening Ankara’s treatment of the two Greek prisoners to the film Midnight Express, which depicted the horrors experienced by an American convict in a Turkish prison in the 1970’s.

The message conveyed by the Independent Greeks after Kammenos’ meeting with his MPs is that the ruling coalition remains strong and stable, but that the small, right-wing party retains its autonomous views and will continue to express them.

However, party spokesperson Madalena Papadopoulou signaled that MPs must respect positions agreed by the leaders of the ruling coalition, and that MPs who buck those official positions will be called to order.

Essentially, the same position was expressed earlier by government spokesman Dimitris Tzanakopoulos, who said that is natural for two ideologically distinct parties to harbor differing views and to express them publicly, but that the key issue is their common aim to exit the bailout memorandum.

Agreeing to disagree on Savvidis

Another issue that divided Tsipras and Kammenos was their stance toward business mogul Ivan Savvidis, with the PM determined to cut the businessman loose after the debacle with him entering a football pitch armed, while Kammenos and his MPs either remained silent or supported Savvidis, who has established a strong foothold in northern Greece, where a majority share Kammenos’ hardline position on the FYROM naming issue.

Syriza, for its part, is furiously denying opposition claims that Savvidis has enjoyed a privileged position with the government, and cites its initiatives to clean up Greek football.