Interview with Danièle Nouy, Chair of the Supervisory Board of the Single Supervisory Mechanism, published on Sunday April 6… 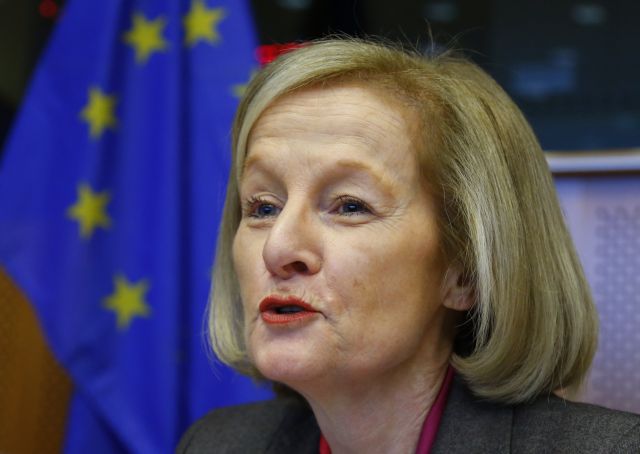 Interview with Danièle Nouy, Chair of the Supervisory Board of the Single Supervisory Mechanism, published on Sunday April 6. The interview was conducted by George Papaioannou.

What kind of state are European banks in? Why does the ECB need to carry out stress tests?

The situation of European banks is better than the market assessment. The market has underestimated the work that has been done in terms of repairing the balance sheets of European banks. For example, since the outbreak of the crisis, banks have received capital injections of EUR 450 billion from both the private and the public sectors. Furthermore, the median core Tier 1 capital ratio of large European banks stands at 11.2%, which represents a four percentage point increase since the beginning of the crisis. And this despite the fact that the definition of the ratio has been getting stricter every year. I consider that, for the time being, markets have not seriously taken into account these improvements, as reflected in banks’ stock market values, which are lower than their book values. This is why, with the stress tests to be held by November, we are moving ahead with the comprehensive assessment of large European banks, in order to ensure transparency and to enable markets to evaluate properly the improvement of bank balance sheets. Of course, this does not mean that further balance sheet repair is not necessary if the system is to be reinforced as a whole.

What are you expecting from stress tests?

First of all, that any capital needs which might emerge will be funded by the private sector. There is adequate liquidity in the market to be used for capital injections to the banking sector and the transparency of bank balance sheets which will result from the ECB’s stress tests will help banks to raise the necessary funds from the market. Of course, I acknowledge that it would be difficult for the market to respond if all banks were to resort to the same investors at the same time. In this case they would have to have recourse to public backstops at the national and, as a last resort, European levels. In an ideal world, this would be the last time that public money is used to rescue banks in the euro area.

Will the fund’s EUR 55 billion endowment be sufficient?

Look, under normal circumstances, it will. However, in order to cope with the needs that arise at the outbreak of a crisis, such as the one we have experienced, there are concerns that more money might be necessary. In their recent compromise on the single resolution system of the banking union, euro area countries agreed to provide the Single Resolution Fund with borrowing capacities.

In a recent report on the global financial system, the IMF stated that in the event of a new crisis, European governments would need to inject hundreds of billions of euro to rescue the banking sector. What is your reaction to this?

I have seen several analyses, in particular from US analysts, referring to even trillions of euro, but I do not know where these divs are coming from. The ECB has access to European banks’ data and is, therefore, in a better position to know this.

I am saying this because, also in the case of Greece, the IMF expressed doubts about the result of stress tests carried out by the Bank of Greece. According to the IMF, needs were more than double the amount proposed.

I know, but I am certain that my colleagues at the Bank of Greece have done their very best to properly assess the situation. This being said, Greece’s four systemic banks will be subject to the ECB’s comprehensive assessment, just like all other large European banks. It will provide an additional benchmark.

The main objective of the banking union is to eliminate the risk of a banking crisis turning into a fiscal crisis again. Has the cord between banks and the state been cut?

This cannot be done from one moment to the next. It is done gradually. We are working in this direction and significant steps have been made. The progress achieved in terms of the banking union within two years has no precedent in Europe; however, there is still more to be done and more will be done. What is important is that the situation today is much safer than what it was at the beginning of the crisis.

You have stated that you will not hesitate, if necessary, to resolve a bank. Aren’t you worried that this might create a domino effect?

I think that we have to stop rescuing banks which are no longer viable. Europe is not lacking banks or banking services and I believe that this will be good for strengthening healthy competition in the sector. Of course, resolution should be carried out in an orderly manner to avoid creating problems in the system, which is the reason why bank rescues happened in the past. But now we have a resolution plan, appropriate mechanisms, enforcing authorities and necessary funds, which enable us to proceed with the resolution of a bank in a concerted manner. We have all the tools to make this easier.

The procedure for bank resolution is characterised as being complex, since both the ECB and state authorities will be involved. In practice, can it be effective?

The procedure is less complex today than it was some weeks ago. The latest compromise among European states is going in that direction. In theory, although it has not yet been tested, a bank can be resolved in a weekend.

Will this work in a crisis situation though?

Yes, provided that we have already done everything that needs to be done beforehand: recovery and resolution plans, for example. As regards the larger banks in particular, these things have already been done. In several countries, where resolution authorities exist, such plans exist. Overall, few things are still pending.

How safe should depositors feel with regard to their savings?

A banking system with transparent balance sheets – as the European banking system will be after the comprehensive assessment exercise – and a single supervisory authority will make depositors safer. Moreover, changes towards a single guarantee scheme as well as the guarantees provided by national funds ensure that deposits are insured up to at least €100,000. Furthermore, all changes being implemented with the aim of increasing the perimeter of bondholders who could potentially be involved in a bail-in by 2016 will offer greater protection to depositors.

Are deposits with the so-called systemic banks under the ECB’s supervision safer than with other banks?

No, they are just as safe. This is a single system, as banks will be subject to the same rules and the same supervisory manual whether they are directly or indirectly supervised by the ECB. Besides, the ECB can, if deemed necessary, place a smaller bank under its direct supervision at any time.

Will there be another Cyprus?

There was a major debate regarding deposit protection following the Cypriot crisis and it was clearly decided that deposits would be insured up to €100,000. However, indeed, there are still restrictions on the movement of capital which are contrary to the European treaties and the principles of the EU.

Very good work has been done and progress has been impressive but it takes time. Sometimes it is better to do things right than do things fast.

Do you agree with Mr Provopoulos’ statement that Greek banks are among the best capitalised banks in Europe?

Incredible progress has been achieved in terms of restructuring and consolidating Greek banks. My colleagues at the Bank of Greece have done a great job in challenging times and I am certain that the situation of Greek banks has improved significantly. The four systemic banks are subject to the comprehensive assessment, as is the case with all other large European banks. It is important to note that Greek banks are now finding equity on the markets. I believe that all the efforts that have been undertaken until now are moving things in the right direction. Let me also add that, from 4 November, the Bank of Greece’s supervisory staff will work together with the ECB as part of the Joint Supervisory Teams to supervise Greek banks and we are looking forward to a fruitful cooperation.

What is your message to Greece? What does the banking union mean for ordinary citizens?

It means a lot. The banking union will lead to a more resilient and efficient banking system thus benefiting the economy and, consequently, every European citizen. Increased confidence in Europe’s banking sector will bring down the cost of money and this will give a boost to economic activity – especially in the countries that have been hit the most by the crisis. Greece is one of the first in line to benefit from this.