Pelegrinis: “If I have committed a crime, they can come arrest me” 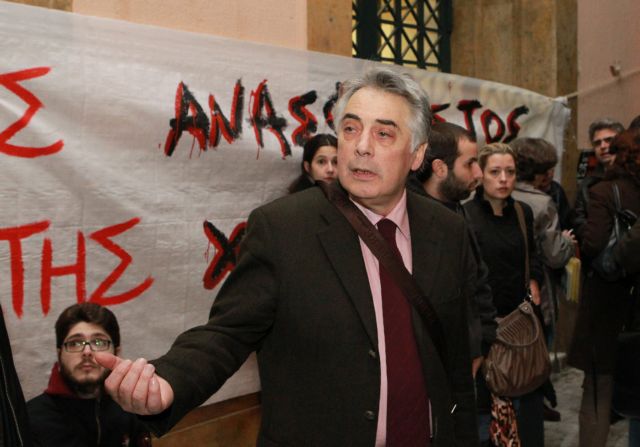 Last week the public prosecutor issued a request to the administrations of eight universities to submit lists of administrative employees who will be inducted in the government’s suspension and dismissal plans. When asked about the possibility of outside interference in the operation of the universities, the Rector of the University of Athens Theodosis Pelegrinis responded that “if I have committed a crime, they can come arrest me”.

This year’s annual meet-and-greet of first-year students with the academic and administrative staff at the University of Athens’ Propylaea building took on a different character. The Rector Theodosis Pelegrinis along with the president of the Medical School Thanos Dimopoulos and the president of the Literature Department Eleni Karamolegou welcomed the students and informed them that difficult times were ahead of them.

In his speech Mr. Pelegrinis noted that it is time for the University to defend itself, while dubbing the government’s suspension and dismissal plans to be “unfair and arbitrary”. He also assured that “the semester will not be lost” and that the main concern is “to see to it that the next semesters of studying are not lost”.

The Ministry of Education had set a deadline for today for the Universities to submit their lists of administrative staff to face suspension and dismissal. So far few universities, such as the University of Economics, have complied with the request.