Opposition leader Alexis Tsipras announced that MP Manolis Glezos will be a SYRIZA candidate in the upcoming European elections, from Crete where… 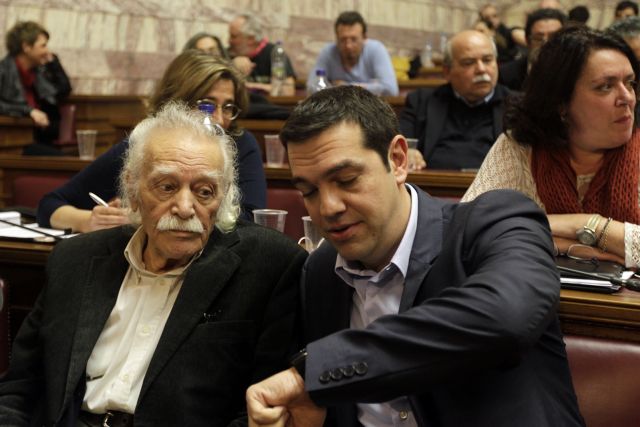 Opposition leader Alexis Tsipras announced that MP Manolis Glezos will be a SYRIZA candidate in the upcoming European elections, from Crete where he is currently on tour. Mr. Glezos’ candidacy will be confirmed at Friday’s meeting of the party’s Political Secretariat.

Mr. Glezos confirmed his candidacy in a written statement where he explained that “in the grim times we are living, I have no right to be absent” and stressed the reasons he chose to accept Mr. Tsipras’ offer. The resistance fighter-cum-politician explained that his personal reason for accepting the offer was to escalate Greece’s struggle and claims regarding Germany’s debts towards Greece.

According to Mr. Tsipras, if elected, Mr. Glezos intends to raise the critical German reparations issue at the very first session of the new European Parliament. Mr. Glezos noted that he is called upon by his “class-mates who were lost in battles, executed or died while refusing to submit” to support the claims and that “it is too late to give up”. Mania Papadimitriou is set to take up Mr. Glezos’ seat in parliament.

Aside from Mr. Glezos’ candidacy, the opposition party’s political secretariat will discuss the candidacy of Dimitris Christopoulos, in relation to the recent expulsion of Sabiha Suleiman from SYRIZA’s list of MEP candidates.