The coalition government managed to pass its critical multi-bill, which encompasses the recent agreement with the troika, through Parliament late on Sunday evening… 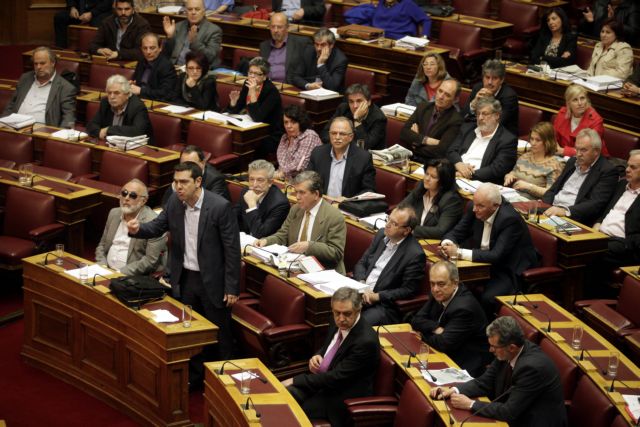 The coalition government managed to pass its critical multi-bill, which encompasses the recent agreement with the troika, through Parliament late on Sunday evening. While this is considered a victory for the coalition government, it suffered losses and was left more fragile before, while opposition leaders SYRIZA failed to delay the discussion and vote through a motion of non confidence.

New Democracy MP (and candidate for the Municipality of Athens) Nikitas Kaklamanis voted present in the vote for the first article of the multi-bill and was later formally ousted from the party’s Parliamentary Group. This leaves the coalition government with a fragile parliamentary majority of 152 MPs, from a total of 300.

On Saturday, the Deputy Minister of Agricultural Development Maximos Harakopoulos resigned from his post, as he had previously hinted, over his disagreement with the changes regarding milk. Likewise, the former Prime Minister and PASOK president Giorgos Papandreou, voted present in the vote for article 2 of the multi-bill, provoking the ire of current party president and government VP Evangelos Venizelos.

Earlier, SYRIZA president Alexis Tsipras made a motion for a vote of non confidence against the Minister of Finances Yannis Stournaras, causing huge uproar in Parliament and interrupting the discussion for the multi-bill (in accordance with parliamentary rules). Mr. Tsipras accused the Finance Minister of being responsible for the crime being committed against the Greek people and economy, as well as causing the humanitarian crisis.

The motion surprised the coalition government, which initially accepted the challenge via the Minister of State Dimitris Stamatis, before arguing that the motion was against regulations (since a similar motion had been attempted in November). SYRIZA’s motion nevertheless was supported by KKE and ANEL, while the coalition government found an unexpected ally in former coalition partners DIMAR, whose president Fotis Kouvelis decided to reject the motion. Mr. Tsipras threatened to make a motion of non-confidence against the President of Parliament, should the opposition’s motion not be accepted.

The President of Parliament Evangelos Meimarakis, visibly agitated by Mr. Tsipras’ motion and claims, argued that he was “not going to be blackmailed” and ultimately rejected the motion against Mr. Stournaras, on account that it targeted him as an executor of government policy, rather personally. This development dissatisfied the opposition leader, who claimed that “an unprecedented coup is taking place” and departed from Parliament with his MPs, only to return for the vote later at midnight.