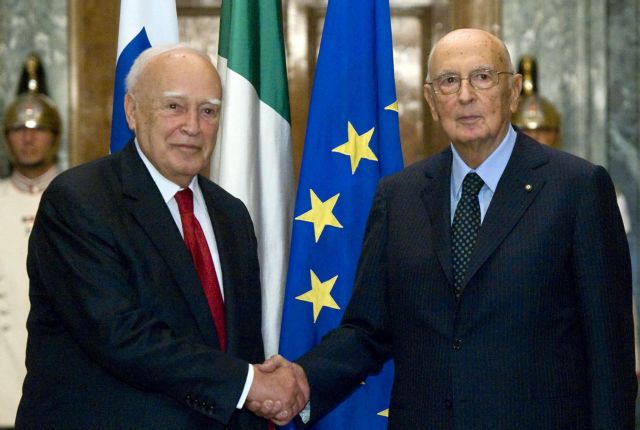 The President of Democracy Karolos Papoulias is currently on an official visit to Italy and met with the head of the Catholic Church Pope Francis and is scheduled to meet his Italian counterpart, Giorgio Napolitano, later in the day.

The Pope and Mr. Papoulias met for about 40 minutes, with the Pontiff commenting that the Greek president «is a wise man». The President exchanged presents with Pope Francis and invited him to visit Greece.

Mr. Papoulias is scheduled to meet with his Italian counterpart alter in the day, with the two Presidents inaugurating an exhibition at the presidential Quirinal Palace in Rome on the Classical era, Europe and the relationship of Greece and Italy.

On Thursday Mr. Papoulias met with the President of the Chamber of Deputies Laura Boldrini. Mr. Papoulias commented that since his last meeting with Mrs. Boldrini in Athens a lot has changed for Italy, starting with the election of Prime Minister Mateo Renzi, who “wants to change many things and for which we hope he succeeds”.

The Greek President also commented that there were many successes in the Greek economy, thanks to the Greek people’s sacrifices and expressed his hope for “better days yet to come”.