The ECB, EC and IMF triumvirate issued a statement on Wednesday regarding the recent agreement that was struck with the Greek government, which… 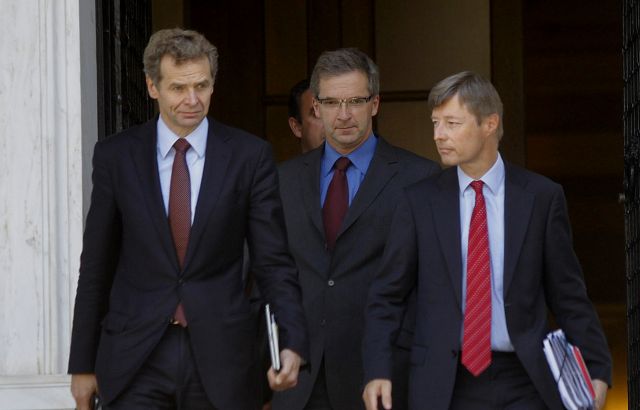 The ECB, EC and IMF triumvirate issued a statement on Wednesday regarding the recent agreement that was struck with the Greek government, which concluded the latest review.

The government believes that the deal will in turn initiate new financial and political developments, which will contribute towards the recovery of the Greek economy.

The troika’s statement is as follows:

“Staff teams from the European Commission (EC), European Central Bank (ECB), and International Monetary Fund (IMF) have concluded their review mission to Greece. The teams have reached staff-level agreement with the authorities on policies that could serve as the basis for completion of the review.

The mission and the authorities agreed that the economy is beginning to stabilize and is poised for a gradual resumption of growth, broadly in line with our previous projections. Prices are adjusting and inflation remains well below the euro area average.

Fiscal performance is on track to meet program targets. Preliminary estimates suggest the 2013 primary balance target was met with a substantial margin. While only a small portion of this over-performance will carry over into 2014, we believe that the 2014 fiscal targets will also be met, taking into account the measures being implemented and planned.

The authorities reconfirmed their commitment to implement policies needed to achieve the 2015 primary surplus target of 3 percent of GDP, including as needed by extending expiring fiscal measures, such as the solidarity surcharge. The authorities are making progress on structural reforms to improve the growth potential and flexibility of the Greek economy and help create a fairer and more supportive environment for investment, growth, and job creation. They are committed to implementing a very large majority of product market reforms identified by the recent OECD study in the areas of food processing, tourism, building materials, and retail; to taking concrete measures to liberalize the transport and rental markets and open up closed professions; and to reducing social security contribution rates and nuisance taxes. Notwithstanding delays, progress is also being made in reforms of the public administration, which should reduce the burden of red tape and improve the quality of public services to the Greek people. Labor market reforms are behind schedule, but the authorities are committed to implementing them gradually in the remainder of 2014. Competitiveness will be further enhanced by energy market reforms, such as the rationalization of pricing policies to ensure adequate cost recovery and avoid hidden subsidies, the split of the Public Power Company into two entities ahead of privatization, and the launch of a fundamental reform of the gas market. The authorities also agreed to revitalize the privatization of other corporate and real estate assets, which would provide needed financing to the state while unlocking investment.

Alongside these structural reforms, the authorities are continuing their efforts to strengthen the social safety net to cushion the impact of the economic downturn. Notably, programs to hire youth and unemployed workers under programs financed by EU structural funds will be expanded, and a minimum income guarantee program is being launched on a pilot basis in two municipalities with the aim of rolling it out on a phased-in national basis in 2015.

The authorities are committed to taking all necessary actions to ensure that banks remain healthy and adequately capitalized and are in a position to support the economic recovery. We take note of the stress test results and attendant capital needs estimates by the Bank of Greece. However, according to the assessment of the mission teams, there are upside risks to the capital needs estimates, in particular, if the authorities and banks do not urgently and efficiently address the high level of non-performing loans. Swift recapitalization of banks will strengthen their balance sheets. The envisaged injection of fresh private capital into the Greek banks is a sign of confidence and will help to strengthen the private management of Greek bank. The Bank of Greece should remain vigilant in its oversight of the banking system and proceed forcefully in requiring banks to quickly work out their large stock of problem assets. The authorities are also committed to significantly strengthening the private sector debt resolution framework and facilitating the orderly and swift workout of impaired bank assets. The buffers in the Hellenic Financial Stability Fund will be retained to meet future adverse contingencies.

The Eurogroup and the IMF’s Executive Board are expected to consider approval of the Review in the coming weeks.”