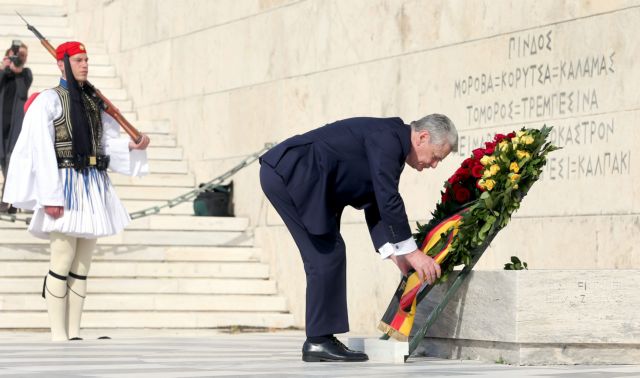 The overwhelming majority of German newspapers have covered the official visit of German President Joachim Gauck to Greece as well as the controversial reparations issues.

The Frankfurter Allgemeine Zeitung reported that “Gauck rejected Athens’ demand for reparations”, while the Süddeutsche Zeitung claimed that the German President was “Decisively friendly”, indicating Germany’s stance on the subject.

The Süddeutsche Zeitung explained that most Germans are not aware of the brutalities, persecutions and mass executions committed by the German forces during the Nazi Occupation of Greece and argues that the rejection of Greek financial demands are in accordance with international legislation. The newspaper however explained that “cold indifference” towards Greece may be overturned by a “voluntary support” of the surviving victims.

While the Die Welt states that “nobody can deny what happened during the German occupation” it adopts a more aggressive stance, claiming that countries “cannot be held responsible perpetually” and that “new demands act like a time bomb in international politics”. The newspaper argues that Greek demands could open the floodgates for reparations over colonization or even the US-Vietnam War.

The Neue Osnabrücker Zeitung was more diplomatic in its approach and stated that the German president rejected the Greek demands as he had no jurisdiction on the matter, while admitted the brutalities against innocent civilians. The newspaper feels that Mr. Gauck managed to balance his two obligations because “he found the right words”.