German media comment on the visit of President Gauck to Greece

The German President Joachim Gauck is expected to arrive in Greece today for a two day visit, where he will pay his respects to the victims of the Nazi … 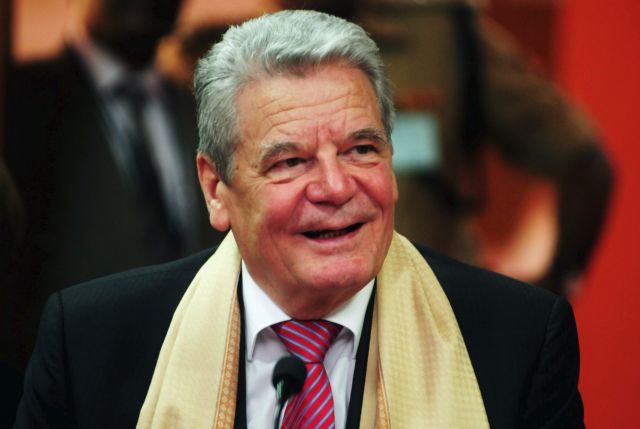 The German President Joachim Gauck is expected to arrive in Greece today for a two day visit, where he will pay his respects to the victims of the Nazi occupation. While Mr. Gauck has admitted that “public admission” is necessary, he has ruled out the possibility of reparations, since he cannot stray from Berlin’s official position.

The Tagesspiegel commented that Mr. Gauck is visiting “estranged friends” and that the German President will attempt to show a sign of reconciliation by starting his visit at the village of Liagades. The German newspaper explains that Mr. Gauck’s trip is very important, as he will be faced with a dark chapter of the German occupation during an era when the relations between the two people are tense.

The newspaper states that during the last visit of a German President to Greece, during Johannes Rau’s tenure, relations between the two countries were amicable, but quickly began to deteriorate with the onset of the financial crisis that persists.

The Frankfurter Allgemeine Zeitung remarked that President will not have an easy time during his stay in Greece, while considering the police presence and tension during Angela Merkel’s prior visit, which resembled a visit to a combat zone. The newspaper noted that this tension has lessened since the visit of the Finance Minister Wolfgang Schäuble.

Deutsche Welle highlighted “the dangers of Greek-German friendship” and commented on how the financial crisis has made enemies of Greeks and Germans and stressed that Gauck will underline the ties that bond Greece and Germany.