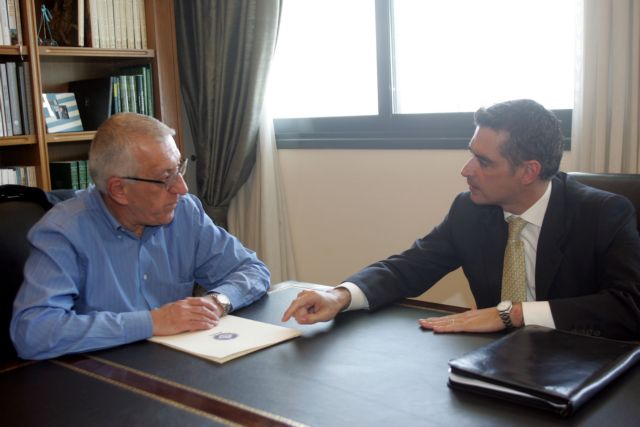 A “civil war” is about to break out amongst New Democracy voters, as Nikos Kaklamanis and Aris Spiliotopoulos are going to run against each other in the upcoming municipal elections.

Prime Minister Samaras met with both candidates over the past few days to discuss their intentions, but avoided giving a definite answer as to who he would support. In an interview on SKAI’s news program, Mr. Kaklamanis revealed that he was told to wait 8-10 days before making any announcements.

During that time it appears that the PM decided to support Mr. Spiliotopoulos’ candidacy. As expected, Mr. Kaklamanis was not pleased by this development considering his past experience as Mayor of Athens and his old friendship with the PM.

The displeasure of Mr. Kaklamanis in Mr. Spiliotopoulos’ nomination was evident when he hinted that Mr. Spiliotopoulos’ interest in Athens is “opportunistic” before visiting residents in Agios Panteleimonas neighborhood in down town Athens. Aside from the possibility of a “civil war”, New Democracy will also have to consider that Golden Dawn’s Ilias Kasidiaris and ANEL’s Vasilis Kapernaros are also running in the elections.

The situation is similar in Thessaloniki, where the current regional governor Apostolos Tzitzikostas decided to run against Yannis Ioannidis, who had already announced his candidacy in the upcoming elections with the support of New Democracy.