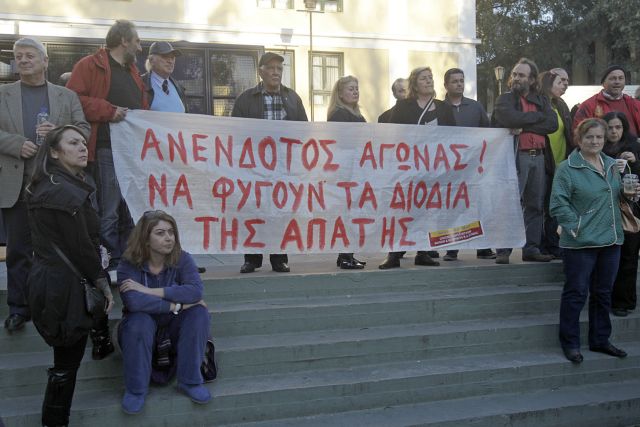 The nine people who were arrested for a rally that escalated with an arson attack against a toll booth in Malakasa have been taken to prosecutor to state their plea and later set free. The nine people are facing charges of disrupting the peace, arson, disrupting transport security, obstructing transport, traffic disturbance, excess damage and highway code violations.

Amongst the nine arrested is the Mayor of Oropos Yannis Economakos, four deputy mayors, two municipal councilors and two presidents of local unions. At present the investigation is focused on determining who set fire to the toll booth, with the police hinting that further people may be detained and additional charges may be pressed against them.

Reactions against the arrest of the mayor have been fierce, with SYRIZA demanding “the immediate release of the mayor of Oropos and the other citizens who have been arrested” and accused the government “of losing its temper”, while stressing that the toll hike will “turn the area into a peculiar apartheid economy”.

The Regional Governor of Attica Yannis Sgouros also demanded that the mayor of Oropos and other municipal officers be released, while condemning the arson attack and damages caused to the toll booths. Mr. Sgouros noted that “a solution is only possible with dialog” and urged for the arrest of those responsible.

The Minister of Infrastructure Michalis Chrysochoidis appeared on SKAI’s morning chat show to announce that the toll hike will not apply to local residents as well as those who own holiday homes in Oropos and the greater northeast Attica. All that is necessary is for those interested to register their details with the appropriate documentation proving their residency or ownership of property.

Mr. Chrysochoidis clarified that the toll hikes had been agreed upon in the original 2007 concession agreement and that they had even been delayed. He also accused the municipal authorities of Oropos of calling local residents to mobilize rather than reassure them about the toll hike. The Minister admitted that the prices drivers are being asked to pay are high, but claimed that the alternative would be to carry out new wage and pension cuts.